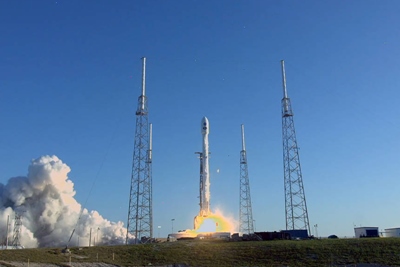 NASA’s Transiting Exoplanet Survey Satellite (TESS) has deployed successfully in space, at the start of a mission that will survey virtually the entire sky for exoplanets, before ground-based telescopes use spectroscopy to search for signs of extra-terrestrial life.

It will then switch to the northern sky during the second year, ultimately covering around 85 per cent of the sky. Sensitive photometric equipment on board TESS will look for slight decreases in the brightness of relatively nearby stars, indicative of exoplanets “transiting” in front of their hosts.

The mission is similar in that respect to NASA’s Kepler mission, which has so far spotted more than 2600 exoplanets. However, where Kepler was restricted to searching only a small portion of the sky, and relatively distant stars (at least 300 light years from Earth), TESS is able to detect exoplanets transiting around much brighter, closer stars in the Milky Way galaxy.

And that brightness means that powerful ground-based observatories and the forthcoming James Webb Space Telescope will be able to follow-up on TESS’ discoveries with spectroscopic techniques – looking for signals indicating the presence of water vapor, oxygen, and other atmospheric gases, as well as being able to determine the size and density of the exoplanets.

“The targets TESS finds are going to be fantastic subjects for research for decades to come,” said Stephen Rinehart, TESS project scientist at NASA’s Goddard Space Flight Center in Greenbelt, Maryland. “It’s the beginning of a new era of exoplanet research.”

TESS equipment
According to the Massachusetts Institute of Technology (MIT) TESS Science Office, the on-board instrumentation comprises four identical cameras. Each features seven lenses, alongside a package of sensors and electronics to detect transiting exoplanets.

Those lenses provide the wide field-of-view (24×24 degree) that will enable TESS to observe the entire sky. Other optical features include a red-optical bandpass covering the 600-1000 nm wavelength.

Back-illuminated CCD detectors built by MIT’s Lincoln Laboratory offer 16.8 megapixel resolution, within a 62×62 mm area. The imaging area comprises 2048×2048 pixels, with the remaining pixels used as a frame-store to allow rapid (about 4 ms), shutterless readout with read noise of less than 10 electrons per second. The team says that because the detectors operate at a temperature of around -75°C, dark current is negligible.

From the full-sky survey, astronomers should end up with a list of 50 transiting planets, or “objects of interest”, with radii smaller than four times that of Earth, for more detailed spectroscopic follow-up.

Critically, the survey will be fast. George Ricker, TESS principal investigator at MIT’s Kavli Institute for Astrophysics and Space Research, said: “One critical piece for the science return of TESS is the high data rate associated with its orbit. Each time the spacecraft passes close to Earth, it will transmit full-frame images taken with the cameras. That’s one of the unique things TESS brings that was not possible before.”


Which of our near stellar neighbors has planets? Our new astrophysics mission, @NASA_TESS, is launching today to help us find out. Here’s how: https://t.co/Qx1nAqI8AK pic.twitter.com/8nk0OHbYUU