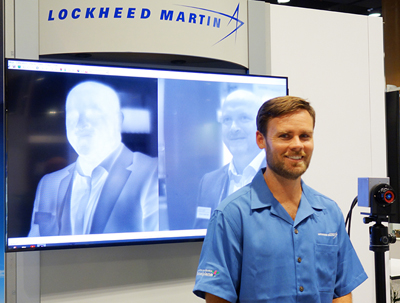 Driven by LM Santa Barbara Focalplane’s large format, small-pixel nBn detector technology, the µLAD runs at high operating temperatures (140K compared with the 77K typical of these cooled devices), resulting in a compact, portable package, which could be integrated in portable devices or fitted onto a UAV.

Brendan McCay, the camera’s developer and Program Manager at LM’s Santa Barbara Focalplane facility, told optics.org: “The camera’s sensor toggles between the mid-infrared and a combination of visible through shortwave-infrared at a rapid frame rate of 360Hz. So it achieves simultaneous collection.”

”The typical use of this camera would be in night vision and in degraded environments such as fog. It can also pick up the short wave ID tags used by military personnel in the field.”

The camera is designed for military applications that demand reliable performance in a low size, weight, power and cost configuration. These range from missile seekers, weapon sights and remote weapon stations to small gimbal or gimbal-less platforms and tactical air and land sensor systems for OEM and military unmanned aerial vehicles. Other applications include hand-held, man-portable missions, missile warning and threat detection systems and electro-optical payloads.

McCay is confident that this device will also perform well commercially. “There’s only one other manufacturer of a dual-band mid-range and visible-to-SWIR camera and that is analog rather than digital. Also our high frame rate of 360Hz allows some cool capabilities such as bullet tracking, to identify the origin of hostile fire.”

This dual-band µLAD camera core delivers high-definition SW/MW IR imagery at 1280-by-1024 pixels (1.3 megapixels) with the same high-speed digital output as a single-band MWIR offering. Other key specifications include: