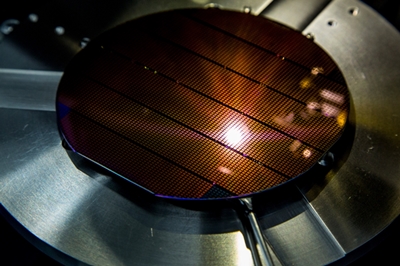 Major photonics component supplier Finisar has warned investors of a “challenging outlook” for the industry over the next few quarters.

Coupled with news that Finisar’s executives were now reviewing the business and markets in which they currently participate, the company’s stock price dropped around 10 per cent following the call, although it has since recovered much of that loss.

Overall, Finisar posted sales of $332 million for the three months ending January 28. Although that figure was almost exactly the same as the immediately prior quarter, the company swung to a pre-tax loss of $11.8 million – partly a result of the investment in new manufacturing capacity and the drop in fab utilization.

VCSEL yields
Hurlston joined the California-headquartered firm in January, shortly after Finisar revealed that it had signed a deal with Apple that would see it ramp production of VCSELs at a newly refurbished semiconductor fabrication facility in Sherman, Texas.

Apple has deployed VCSEL arrays to perform the “Face ID” security scan in the iPhone X model launched last year, and is expected to use them more widely in the future. But right now demand is now in something of a pause while follow-up products are designed by Apple and others, likely for release ahead of the holiday period late in the year.

Finisar’s CFO Kurt Adzema admitted that Finisar was not currently producing or selling the number of VCSEL arrays it had hoped to be, telling the investor call: “We're working on our yields; they're not where we would like them to be.”

Asked by one analyst about the potential for both out-sourcing production and consolidation within the optical communications sector, new CEO Hurlston said: “Right now I’m reviewing all aspects of the business and trying to apply some of what we did have in [an] out-sourced model [at Broadcom], and look at this through a new lens. I would say at this point everything’s on the table.”

Since the call, news of significant consolidation within the industry has emerged, with Lumentum set to acquire Oclaro in a deal valued at $1.8 billion.

Fab investment
Hurlston also confirmed that the current plan was to get the new Sherman fab up and running in the second half of this year, in time for the anticipated ramp in demand ahead of the November and December buying rush.

Adzema estimates that the initial phase of investment at the site will amount to some $150 million. Once that is in place, added Hurlston, the new fab should be able to generate upwards of $50 million sales revenues per quarter, rising to perhaps $80 million.

In the longer term, Finisar will look to consolidate the new high-volume capacity coming online in Sherman with its existing fab in nearby Allen.

Commenting on demand for 3D sensing applications beyond Apple, Hurlston indicated that it was still early days for customers looking to deploy the technology on Android platforms – but that “everybody was talking about” the application.

“I’m optimistic that we're going to see volume both from additional phone manufacturers as well as from segments like automotive,” he said, adding that automotive applications would be unlikely to take off and drive significant sales volumes until 2020.

Looking to the more immediate future, Hurlston and Adzema said they expected to post sales of between $300 million and $320 million for the current quarter.

“The expected decline in revenues compared to the prior quarter is driven primarily by lower demand for VCSEL arrays, lower revenues from 40 Gb/s datacom transceivers, and lower telecom revenue driven primarily by the full three-month impact of price reductions,” the CEO told investors.