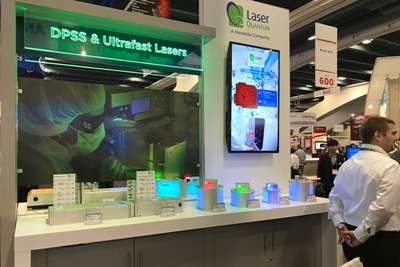 Rising sales and profitability in its photonics business unit have helped propel industrial technology vendor Novanta to what CEO Matthijs Glastra described as a defining year for the Massachusetts-based firm, with “fantastic” financial results.

Strategic acquisitions and organic growth contributed to a 35 per cent increase in annual sales, which reached $521 million. That rise fed through to the company’s bottom line, with net profits for the year near-trebling to $60 million.

Quantum shift
That boom was seen across all three of Novanta’s business units, which respectively cover photonics, vision and precision motion.

Revenues from the photonics division, Novanta’s largest, jumped 33 per cent year-on-year to $232.4 million, partly as a result of the parent company’s full takeover of the Laser Quantum subsidiary.

Laser Quantum has benefited from strong demand for its sources, with Glastra describing the closing quarter of 2017 as a “stellar” one for the UK-based business, driven by the growing requirements of the DNA sequencing market.

He also highlighted solid performance from the Cambridge Technology subsidiary, which is a major provider of optical beam delivery systems.

“In the fourth quarter, design wins, new product revenue and China revenue in the photonics segment were up over 30 per cent versus 2016,” said Glastra. “Applications with strong performance were laser additive manufacturing, marking and coding, via hole drilling, DNA sequencing and micromachining. Our Cambridge Technology team again delivered record bookings with broad momentum across multiple applications.”

Building momentum
That momentum is set to accelerate further both this year and next, added the CEO, telling investors that the firm was planning to ramp production capacity across its factories.

Novanta’s CFO Robert Buckley added that, while sales growth would be likely to moderate this year, annual net profits should still rise – thanks in part to expectations of a lower overall tax rate resulting from changes to corporate tax rates in the US.

Buckley added that the company would be likely to invest some $15 million of capital expenditure this year as it upgraded and expanded its facilities, up from around $9 million in 2017.

Looking back on 2017, CEO Glastra concluded: “2017 was a fantastic year for Novanta. “We’re well on our way in executing our 2020 strategic direction to double the company in revenue to $750 million.”

Said to provide up to 6 W at 660 nm, or up to 12 W at 532 nm, it is based around a pump diode inside the laser head and features a detachable electrical power cable, simplifying its integration into a Ti: sapphire oscillator or other apparatus.

#SPIEPhotonicsWest is here! Come and see the Laser Quantum team at Novanta Booth 731, and check out the brand new #axiom laser on the show floor. pic.twitter.com/fqxFhX9nkP