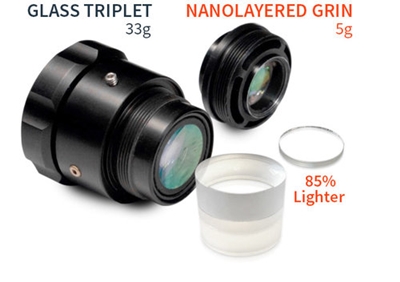 US defense contractor L3 Technologies has made an investment in Texas-based Peak Nano Optics, a maker of nano-layered graded-index (GRIN) optics technology.

While precise financial details of the agreement have not been released, the firms described a “significant minority investment” that closed on February 6, comprising an equity and development package that forms part of a broader expansion plan at Peak Nano Optics.

The deal follows a $5.8 million series A round of venture financing closed almost exactly a year ago, when Peak Nano Optics said it had been “inundated with requests” from potential customers interested in applications within military, firearms sights, augmented and virtual reality, and medical markets.

Disruptive plan
The firm, a joint venture between Peak Nano and the Case Western Reserve University spin-out PolymerPlus, is working to commercialize and scale-up production of what it expects to be a disruptive optics technology.

Its nano-layered GRIN lenses are claimed to be 80 per cent lighter than conventional doublet and triplet lenses, and to offer three times better contrast, much-improved resolution, a wider field of view, and reduced chromatic aberration.

Peak Nano Optics’ CTO Michael Ponting has previously likened the GRIN lens design to the structure of the human eye, which provides a very efficient means of controlling the pathway of light without relying on complicated optics.

Peak Nano’s CEO Jim Welsh said in a release from the two companies that he was “thrilled” to have L3 on board, adding: “L3 operates as an industry leader in many of the markets where our lens technology makes a tremendous impact on system-level performance, which creates new opportunities for our technology.

“This transaction allows us to dramatically accelerate our efforts in much larger adjacent markets, such as virtual reality, where we expect to shape the next generation of optical platform solutions.”

Commercial crossover
Initially developed for high-end military applications, and attracting the attention of the US Defense Advanced Research Projects Agency (DARPA), the nanostructured GRIN lens technology was released for commercial applications in 2016.

Following its investment, seen as a “series B” validation round, L3 says that new product launches could start appearing as soon as next year.

Jeff Miller, the president of L3’s sensor systems business segment, said. “In Peak Nano Optics, we quickly saw the potential for GRIN lens technology, not only in our current markets, but also in its ability to be transformative in a broad range of emerging systems, such as virtual and augmented realities, and the commercial space.”

Peak Nano’s COO Chad Lewis added: “This is the first step in the Peak Nano process, which begins with the identification of commercial opportunities for emerging nanotechnologies and culminates in a real-world consumer product. Taking innovation from the point of discovery and scaling it up to meet the demands of the consuming public is at our core.”

Following last year’s series A funding round, Peak Nano Optics says it has spent the last 12 months designing an advanced, automated production line with integrated robotics at its facility in the Dallas area.

That line is expected to become operational this summer, adding to an existing low-volume site in Cleveland, Ohio, and greatly expanding production volumes. “This round of funding will also enable Peak Nano to advance its offerings in virtual and augmented realities as well as make new advancements in biomedical technology,” the company added.