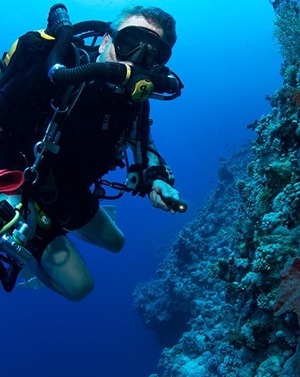 A UK-based maker of gas sensors says that its latest LED-based spectroscopic device will increase the safety of recreational scuba divers, by providing sensitive and accurate CO2 pressure readings.

Gas Sensing Solutions (GSS) has developed the custom “CozIR” sensor for scuba equipment specialist AP Diving, which is headquartered in Cornwall, UK, and has distributors in the US, Italy, Korea, and South Africa.

The technology is specifically designed for use with “rebreathers” – equipment that recirculates air across soda lime to scrub the exhaled CO2 and replace it with oxygen.

Innovative optical technology is critical to the GSS sensors, which use a horseshoe-shaped waveguide to increase the absorption path length and gold-coated reflectors to ensure sufficiently sensitive operation.

Scrubber hazards
According to GSS and AP Diving, recreational divers are increasingly using rebreathers to dive to depths previously only within the reach of commercial divers with large air tanks. Much longer dives than the typical maximum of 30 minutes with standard scuba equipment also become possible.

But the use of a rebreather is not without its hazards – one of which is the potential build-up of colorless, odorless CO2, a gas that can become narcotic even at relatively low concentrations, distracting the diver and in some cases leading to a loss of consciousness.

GSS and AP Diving explain that the soda lime “scrubber” has a finite absorption, with its capability depending on users refilling with the correct soda lime at the right time. “Unfortunately it has been known for users to get it fatally wrong,” report the two firms.

Although strict regulations require rebreather manufacturers and suppliers to test and specify the brand of soda lime that must be used in their apparatus in order to give a guaranteed, safe total usage time per charge of soda lime, a problem is that the soda lime’s CO2 absorption capacity varies with water temperature, as well as the diver's work rate and depth.

“These factors interact, so it is only possible to predict a safe duration using conservative values,” say GSS and AP Diving. “Divers, believing that this time is a worst-case scenario with a high safety margin, sometimes push the limits.”

“The trouble with increased levels of CO2 is that the diver cannot detect it by smell or any other sense,” they add. “For some people, the body automatically increases the breathing rate as a reflex to try and remove CO2, but unfortunately it goes unnoticed in others.”

Mid-IR absorption band
The companies claim that the LED-based sensor developed by GSS, which utilizes the mid-infrared absorption band of CO2 at 4.2-4.4 µm, gives a vital - and potentially life-saving - early warning of a rise in CO2 levels.

The ultra-low-power consumption sensors are also said to be unique in running off batteries, with GSS’ CEO Calum MacGregor explaining:

“Diving is a very challenging environment for a CO2 sensor as it has to cope with large changes in temperature. Fortunately, our LED-based designs have self-correction for temperature changes built in.”

However, MacGregor says that the tougher challenge was preventing water ingress to the device and coping with humidity in a diver’s exhaled breath - as any condensation on the optics could interfere with readings.

“We often produce custom versions of our sensors to meet challenging applications and indeed worked with AP Diving to produce a special version of our ‘CozIR’ Wide Range CO2 sensor,” added the CEO. “The sensor is part potted to prevent water ingress to the electronics, and includes a desiccant to absorb water in the breath before it gets to the sensor's optical cavity. It also has a special hydrophobic coating on the optics that we developed to further negate the effects of any humidity.”

AP Diving's managing director Martin Parker certainly seems impressed. In a release from the two firms, he said: “We have been trialling this new design for over a year. It is working perfectly and we are doing a major push to educate people about how important and life-saving it is to have a CO2 sensor in a rebreather.”

Peace of mind
AP Diving has designed the sensor into a plug-and-play unit that can be retrofitted to any of its “Inspiration” rebreather equipment with branded “Vision” electronics – which are said to date back to 2005.

“Not only is it a safety feature, but it also has a major benefit for divers,” adds Parker. “Now they can use virtually any brand of ‘diving’ soda lime in their rebreathers, as opposed to just the brand that is specified, which can be challenging to obtain when travelling to different parts of the world.

“In addition, if they should push past the recommended usage times, they have the added safety of an appropriate CO2 warning system.” 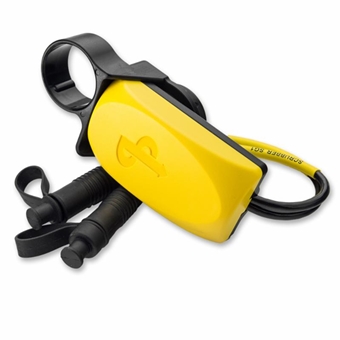 Aside from its low power consumption and fast operation, the optical device is said to be sensitive: it measures CO2 partial pressures down to 3 mbar, equivalent to 0.025 per cent CO2 concentration at a depth of 100 meters.

Parker, who has previously been called on as an expert witness in cases of diving fatalities including the use of rebreathers, concluded:

“Over the past 20 years, I have seen a number of incidents where the diver simply over-used the soda lime and some where the wrong soda lime was used, including cases where slow-reacting soda limes, which are designed for low metabolic scenarios in medical applications, were incorrectly used and could not remove the CO2 fast enough.

“Having a built-in CO2 sensor provides complete peace of mind so that people can enjoy diving without worrying about the time left for the soda lime charge, or whether the soda lime is working properly.

“It's a system that the diver can test pre-dive and will cause the alarm to activate if the diver makes a mistake assembling the rebreather.”

• Founded in Glasgow in 2006, GSS now exports to dozens of countries worldwide, and in 2014 won an Institute of Physics Innovation Award for its use of novel mid-infrared LEDs and photodiodes in gas sensors.