US researchers map brain activity according to thermal signature and blood oxygenation. 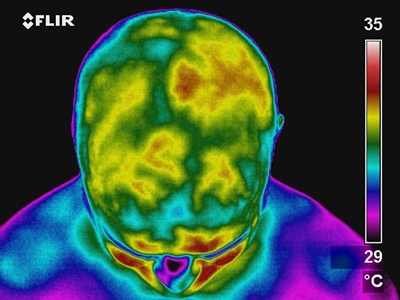 by Ford Burkhart
A Northwestern University (NWU) team is finding new applications for brain temperature data in the operating room, imposing a detailed “roadmap” of cerebral functions that it is hoped will make brain surgery safer.

The technique, infrared thermometry, uses thermal radiation to look at brain function locations with high precision, to ensure that surgeons will, for example, excise tumor tissue precisely without compromising key functions such as language.

Before a crowded early-morning BiOS conference session during SPIE Photonics West last month, NWU’s Todd Parrish illustrated applications of the non-contact technique, which is based on temperature increases of about a half a degree Celsius, showing where brain activity is occurring. “We can do tumor mapping by looking at the thermal signature,” he said.

As with functional MRI, brain activation increases blood flow, resulting in warmer regions that perform a particular function. “This can provide the surgeon with a roadmap of areas to avoid,” Parrish said. He now uses off-the-shelf infrared cameras, but predicted there could be a market for a device that provides such real-time mapping during surgery.

Spectral differences
In his slides, the Feinberg School of Medicine researcher showed a patient with a large left-hemisphere tumor closing in on the language area of the brain, pin-pointing the expected trouble spots (not the image shown above right).

“The more [tumor] you can cut out, the better the recovery,” Parrish said, “but you can take out too much and remove the language function. The goal is to get just the right amount, to get to that point.”

“We need to know where the key parts of the brain are relative to that tumor,” Parrish added. And to accomplish that, his system exploits spectral differences between oxygenated and deoxygenated blood.

The system takes a high-resolution set of images, at speeds of 30-80 frames per second. “And very quickly we can go to look at the differences throughout the brain,” said the researcher. Signal maps can be collected during motor tasks, for example while a patient moves their right hand, and indicate where a tumor has removed part of a function.

But surfaces also change shape during surgery, and thus IR thermometry can keep track of what’s being activated, and where, on the brain surface. “We need to know, within millimeters, where these things are located,” Parrish said.

“This is an exciting area using machine learning,” he concluded. “It’s very exciting to develop new methods to help people through surgery.”