State-of-the-art systems able to distinguish between leaves and wood, and help monitor effects of climate change. 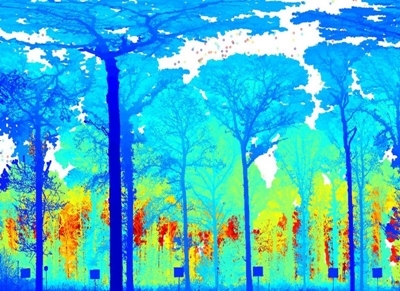 SALCA scanning: seeing the wood in the trees

New multi-wavelength laser scanners are being used to map forests in more detail than ever before, say researchers developing the technology.

Experts at the University of Salford in the UK and elsewhere believe that their state-of-the-art systems, which are now able to distinguish between woody and leafy parts of trees, will help give earlier and better data on the impacts of climate change on nature.

A group of world-leading scientists has just published a series of papers on the topic in a special themed issue of the interdisciplinary Royal Society journal Interface Focus.

In an introduction to the special issue, Salford professor of geography Mark Danson and colleagues wrote: “New laser scanning technologies are set to revolutionize the way in which we measure and understand changes in ecosystem structure and function.”

They point out that traditional forestry techniques can be hugely time-consuming and logistically difficult, and that the new laser techniques under development provide a “tantalizing glimpse” of a completely new way to measure and understand the structure of forests and woodland areas.

Multispectral scans
The approach is not without its challenges – one of which is the level of uncertainty introduced with the multi-wavelength systems caused by incidence-angle effects. In the special issue of the journal, researchers in Finland report how they uncovered a previously unknown systematic error relating to laser incidence angle, describing how different wavelengths “see” leaf structure differently.

But in general the developments at Salford and elsewhere are believed to hold huge promise for ecological studies, adding to the purely spatial information that can be gleaned from conventional lidar scanners. Danson, whose team has developed the Salford Advanced Laser Canopy Analyser (SALCA), said:

“Climate change has led to earlier spring growth in forests in many part of the world but measuring the amount of leaves present in a forest canopy through time is currently almost impossible.

“Our research is testing new methods to map three-dimensional leaf growth in forests, so that rather than rely on an ‘observer’ spotting growth in a forest on a given day, we can map the spatial and temporal changes in leaf development remotely.”

Counting leaves
The higher water content of leafy structures means higher absorption and a very different reflectance signal at the 1545 nm wavelength, making it possible to distinguish between the different parts of a tree - for example to evaluate its relative health, or to measure growth rate.

To check the accuracy of leaf maps, the Salford team counted the leaves on three large oak trees in southern England - approximately 80,000 per tree - and estimated their weight and total area.

In their paper, 3D models of the same three trees were then derived from scans acquired in ‘leaf-off’ condition, with ‘virtual’ leaves added in the same proportions as the measured leaves. The virtual ‘leaf-on’ tree was then compared with the distribution of leaves derived from manual sampling and found to correspond very well.

“Rapid and accurate measurements of the spring growth of leaves in forests will be key to understanding the link between climate change and vegetation growth, and these Royal Society papers confirm the vital role that laser scanners will play in understanding and monitoring these environmental changes,” Danson said.

Coaxial beams
Among the other papers in the special issue is one from a team at the University of Massachusetts in Boston and the Commonwealth Scientific and Industrial Research Organisation (CSIRO) in Australia.

In it, Zhan Li and colleagues describe another multispectral scanner, known as the “dual-wavelength echidna lidar (DWEL)”, that uses similar wavelengths to the SALCA design but with coaxial laser beams for simultaneous acquisition of both spectral and spatial features.

“New multispectral scanning instruments such as the DWEL [open] doors to study biophysical and biochemical properties of forested and agricultural ecosystems at more detailed scales,” wrote the team, although they also point out that the new approach introduces additional sources of error that may prove difficult to overcome.

“Better control of alignment, coupled with optimization of other scan parameters, such as beam divergence and angular sampling, will bring lower variance and higher accuracy to the dual-wavelength information,” the team concluded.

Those kinds of issues were also picked up on by Danson and his colleagues, who wrote: “There are significant challenges associated with data pre-processing, calibration and information extraction that can now be explored with instruments like SALCA. These instruments provide information-rich point clouds that have yet to be fully exploited for forest applications.”