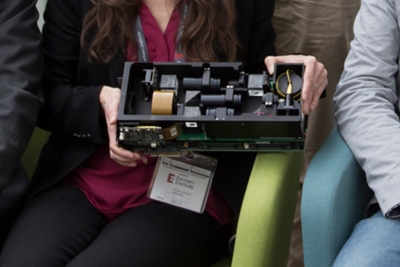 Optalysys, which is based in Wakefield and has a US outpost in Reno, Nevada, claims that in a joint project with DNA sequencing specialists at the Earlham Institute (EI) its optical processing technology was able to perform large-scale DNA sequence alignment at a fraction of the energy costs normally required.

Targets exceeded
The “GENESYS” project collaboration, begun in 2015 with a £0.5 million grant from Innovate UK, performed a benchmark case study against a database comprising 20 bacterial genomes totaling 64 million base pairs.

The project results are also said to have shown that the optical computing technology holds significant promise for long-read sequence alignment, where speed improvements of several orders of magnitude over conventional software algorithms might be possible.

Optalysys CEO and founder Nick New said in a company release: “The collaboration with EI has been a great success. We have demonstrated the technology at several international conferences - including Advances in Genome Biology and Technology, Plant and Animal Genome Conference and Genome 10K/Genome Science - to an overwhelmingly enthusiastic response. We are looking forward to continuing our strong relationship with EI through the beta program and beyond.”

He explained at the time: “This application is very much based on pattern recognition, reading in small strings of DNA and searching for a match within the millions of base pairs in a test database - conceptually similar to the original use of the technology to look for very small structures hidden within much larger data."

EI’s Daniel Mapleson, “analysis pipelines” project leader at the institute who was closely involved in the Innovate UK project, added: “Genomic institutes are faced with analyzing more and more data, and it is really exciting that new technologies like the Optalysys optical processing platform can support bioinformaticians processing data accurately, at a low cost and at high speeds.”

Cloud-based commercial launch
Optalysys says that the technology resulting from the project is set to launch this month, in the form of a cloud-based platform, and offered to a closed “beta” program of select institutional customers - including EI, Manchester and York universities in the UK, Oregon State University in the US, as well as China’s Zealquest Scientific Technology, in co-operation with the Shanghai Bioinformatics Center.

Also quoted in Optalysys’ release, Innovate UK’s “innovation lead” for emerging technologies Jon Mitchener said: “GENESYS is a project that not only exemplifies the research and development done (combining novel optical HPC and deep learning AI techniques with a really important health-screening application), but also the way that support from Innovate UK can help accelerate the move from a prototype towards commercial product launch for a high-potential British SME like Optalysys.”

• The company, which has been working with the US Defense Advanced Research Projects Agency (DARPA) on other applications for optical processing, has recently set up a scientific advisory board, adding significant optics and photonics expertise.

Members of the three-strong inaugural advisory board include Timothy Wilkinson, a professor of photonic engineering at the University of Cambridge, and the retired NASA scientist Richard Juday, who set up and managed the Hybrid Vision Laboratory in the Automation and Robotics Division at NASA's Johnson Space Center in Houston.

Wilkinson is regarded as a leading expert in free-space optics, devices and systems, and is currently working on next-generation liquid crystal devices suitable for 3D holographic displays. Juday brings world-leading expertise in SLM development and pattern recognition algorithms for optical correlation, and is a Fellow of both SPIE and OSA.

The third member of the new board is University of Manchester professor Douglas Kell, who has pioneered the use of artificial neural networks to solve problems in biology.