That sales figure represented a rise of 8 per cent on fiscal 2016 – mostly the result of acquisitions including machine vision camera firm Point Grey Research – and although the company swung to a net loss of $50.3 million in the closing quarter of 2017, that was due to a much larger tax bill resulting from the recent changes to the US corporate tax regime.

Cannon, a US Army veteran who replaced Andy Teich in the CEO office in June 2017, told investors that adjusted operating margins were now at a five-year high. “This was accomplished during a year of transition that included an operational realignment, changes to the management team, and portfolio rationalization that resulted in the divestment in our Lorex security business,” he said.

Point Grey adds momentum
FLIR announced the $29 million cash sale of Lorex last week, with Cannon saying that the unit – acquired for CAD$59 million back in 2012 - no longer fitted with the wider company strategy to “build intelligent, turn-key security solutions based on multiple wavelengths”.

The sale of Lorex and pivot away from retail security applications means that FLIR’s 2018 revenues will likely be a little lower than the 2017 total, with Cannon and his executive team anticipating a total somewhere between $1.73 billion and $1.76 billion – equivalent to organic sales growth of around 5 per cent.

But earnings should be higher: Lorex was said to be breaking even on its 2017 turnover of $140 million, and the FLIR board has approved a penny rise in the shareholder dividend, to $0.16 per share (approximately $23 million).

The full-year results show the positive impact of the Point Grey acquisition on FLIR’s “OEM and emerging markets” business unit. Its full-year sales of $347 million were up 42 per cent year-on-year, delivering an operating profit of $103 million.

Commenting on the results in an investor conference call, CEO Cannon said that FLIR was “set up well for 2018”, and highlighted the company’s presence at last month’s Consumer Electronics Show (CES) in Las Vegas, where it highlighted the potential for thermal imaging in future autonomous vehicles.

FLIR rolled out its second-generation thermal camera automotive development kit (ADK) at CES, with Cannon saying that it ought to prove particularly useful in night-time and adverse weather conditions, with the ability to “see” four times further than conventional headlamps. The technology is based around one of FLIR’s high-resolution “Boson” sensors.

DoD certainty
With FLIR’s backlog up 10 per cent year-on-year at $652 million, the CEO added that the company’s organic sales should grow at their highest rate in more than a decade this year, assuming that guidance targets are hit. He added that, from 2019, FLIR should benefit from the now greater certainty over future US Department of Defense budgets.

Cannon is also aiming to improve margins as a result of a corporate “realignment” that will see the current six reporting business units reduced to three as of the next quarter, a move that is expected to reduce complexity and enhance collaboration across the firm.

Other productivity boosts are expected to result from a focus on improved manufacturing yields of thermal imaging sensors. 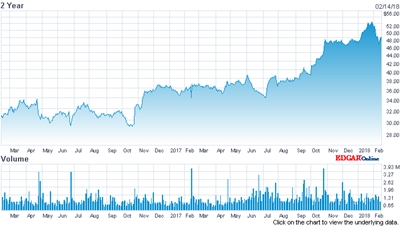 Asked about the possibility of future acquisitions – FLIR now has more than half a billion dollars in cash on its balance sheet – Cannon hinted at a potential move up the value chain, saying that he wanted the company to be able to offer “total mission outcomes” as well as sensor solutions.

However, with market valuations currently close to all-time highs making full-blown acquisitions tricky, the CEO said that minority investments were also being considered.

• With US inflation figures again pushing markets lower, FLIR’s stock price slipped back around 4 per cent in early trading following the company’s latest financial update. However, at just over $46 on the Nasdaq exchange, FLIR’s valuation remains close to the all-time high of just under $53 reached in recent weeks.