National Quantum Initiative wins bipartisan backing for plan to establish quantum sector in the US. 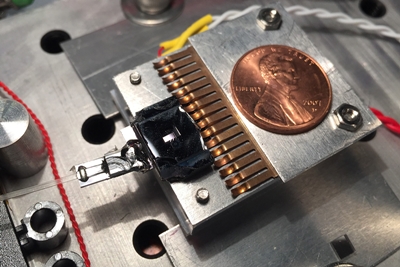 The US Senate has approved the National Quantum Initiative (NQI) Act, a move that is designed to stimulate the creation of a new quantum industry in the country - and one that should provide additional demand for the various photonics tools that underpin the emerging technology sector.

The US National Photonics Initiative (NPI) immediately welcomed the approval, which followed the House of Representatives’ similarly bipartisan action around six months ago.

Ed White, the chair of NPI’s steering committee and also a key participant in the AIM Photonics effort, said that the Senate’s action would help ensure that the US remains a global leader in quantum research and development.

“We applaud Senate passage of the NQI Act and for moving our country closer to a comprehensive quantum technology policy,” White added. “As quantum research advances from the laboratory to the marketplace, the NQI Act will help guide the use of resources and keep our nation’s scientists and researchers at the forefront of this critical field.”

Global race
With China spending heavily on quantum computing and encryption research, the European Union recently funding a decade-long, €1 billion flagship program on the topic, and significant efforts also under way in the UK, Germany, and Canada, calls to establish a similar program in the US have followed.

The NPI has been closely involved, working on the NQI Act with lawmakers in both the House of Representatives and the Senate for more than a year. Specifically, in summer 2018 it advocated for a new quantum computing access program (QCAP), to make quantum computing and communications systems and simulations available to US researchers and users across academia, national laboratories, and industry.

Goals included in the plan include the development of a world-leading industrial quantum technology workforce, advancing quantum research and technology, and developing quantum software and intellectual property.

White noted the bipartisan actions of the lawmakers in relation to the NQI Act, praising Republican Senators John Thune and Lisa Murkowski, and Democrat counterparts Bill Nelson and Maria Cantwell.

“[They] deserve tremendous credit for working together to strike the right balance on this critical legislation,” White said. “With multiple agencies and institutions involved in quantum research and development, passage of the NQI Act will prioritize coordination and cooperation in this important field of research.”

Quantum tech at Photonics West
In fact, efforts are already under way, with the National Institute of Standards and Technology (NIST) and non-profit research laboratory SRI International teaming up to create the Quantum Economic Development Consortium (QEDC) – intended to facilitate industry coordination, and provide a collective quantum “voice” to the US government.

SRI’s Joseph Broz is leading the initial QEDC efforts, and will moderate a special panel session dedicated to the topic at the forthcoming SPIE Photonics West event.

Part of the San Francisco meeting’s largest ever industry program, the Broz-chaired panel session is entitled “The QED-C Consortium and Enabling Photonics Technologies for the Emerging Quantum Industry”, and takes place 1-2.30pm on Wednesday, February 6.

Joining Broz for the session will be panelists from Honeywell, Raytheon, Photodigm, Toptica, and Corning.

Also at Photonics West, Thierry Robin from the France-headquartered market research consultancy Tematys will present a summary of the firm’s latest findings on the potential future economic impact of quantum technologies in the key application areas of sensing, communications, imaging, and computing.

That presentation is scheduled to take place 9-9.45am on Tuesday, February 5. For more details visit the SPIE Photonics West Industry Program page.