Many of this year’s cohort tipped for great technology futures are working in photonics-related innovation fields.

Just out is this year’s edition of 35 Innovators Under 35, the annual list published by MIT Technology Review magazine, which names the world's top 35 innovators under the age of 35. Once again, the list features a significant number of scientists working in photonics-related fields. The subcategories for these awards vary from year to year, but generally focus on biomedicine, computing, communications, business, energy, materials, and the web. Nominations are sent from around the world and evaluated by a panel of expert judges.

On its website the MIT Technology Review states, “We’ve been presenting our list of innovators under 35 for 18 years, long enough to spot some trends. You won’t find a lot of artificial-intelligence innovation in the early days of the list, but AI now dominates. And the list has grown more gender equitable. It was once male-dominated, but this year, for the first time, it includes more women than men.”

Gene editing is invaluable in correcting mutations like the one that causes sickle-cell anemia. Saklayen’s innovation was to design nanostructured add-ons to the laser system that deliver pulses of laser light to large numbers of cells at once, making it possible to dose them with gene editors at clinically useful speeds.

Saklayen’s process does not require an expensive laser, although it has taken her a while to convince other researchers and her advisor that relatively cheap ones were powerful enough. She founded a company, Cellino Biotech, to commercialize her idea and use gene-editing tools to engineer cells. Cellino won the SPIE Startup Challenge in 2017

Carlos Abellan, Quside, is recognised for the development of chip with the fastest and smallest quantum entropy source for secure random number generation.

Dr Abellan is the co-founder and CEO of Quside, a spinoff company from Spanish photonics research center ICFO. Quside’s patented technology enables the generation of gigabit per second quantum random numbers. Using state-of-the-art photonic integration technologies, the products developed by the company can be miniaturised to chip level, allowing complete integration in any connected device.

He commented, “We started in the lab a few years ago, and we’re now focused on developing the technology to make it available at scale. It’s exciting to work on something that will contribute to building future-proven encryption technologies for any connected device.” 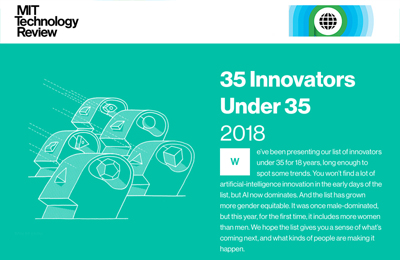 Medical imaging Shinjini Kundu, Carnegie Mellon University. As medical images become more detailed it is harder and harder for a human being to interpret them. Shinjini Kundu created an artificial-intelligence system that can analyze them to find patterns undetectable to the naked eye. Her innovation could have a fundamental impact on the way we detect and treat diseases.

“If there are hidden changes and there is a way to detect these invisible patterns, then maybe we have a chance to diagnose diseases early, before symptoms develop,” she said. Kundu’s system allows humans to look “through the eyes of the computer”, as she puts it, to discover otherwise imperceptible patterns that reveal the early disease process. She also designed the AI to pull out the disease markers from the images so that they can be seen in isolation.

Huanping Zhou, Peking University. Her innovations could make better, cheaper alternatives to silicon solar cells. Huanping Zhou has developed a series of chemical processes that made perovskite-based solar cells more efficient and cheaper to produce. If they can be mass-produced, her innovation will make solar power much cheaper.

The cell Zhou developed converts more than 20 percent of the energy in sunlight, about the same rate as existing silicon panels. Although some other perovskite cells are more efficient, Zhou’s invention is important because it makes the manufacturing process easier and cheaper. The cells can be produced at temperatures below 150 °C by spraying or printing a perovskite-based liquid solution onto a substrate such as glass.

Yin Qi, Megvii. His face-recognition platform transformed the way business is done in China. Seven years ago, Yin Qi founded a company called Megvii in Beijing. Now people from over 220 countries and regions use Megvii’s face-recognition platform, Face++. The company has more than 1,500 employees. Face++ is said to have transformed businesses in China, both online and offline. Subways and train stations use face recognition to expedite the screening process; banking apps use it to confirm the identities of their users.

Archana Kamal, University of Massachusetts, Lowell. She solved a big problem in quantum computing by shrinking the components. Kamal has demonstrated that quantum information could be steered and amplified for transmission before leaving the device where it was processed. His innovation was to alter the path of the transmission of light signals carrying information so as to shrink the components to just a few micrometers across. “That’s a huge difference,” she commented. “Our schemes enable the bulk of quantum signal processing to be done on-chip while preserving the high fidelity of the signals.”

Prineha Narang, Harvard University. Her research on materials at the smallest scale could lead to a new generation of technologies. Narang, an assistant professor of computational materials science at Harvard, studies the optical, thermal, and electronic behavior of materials at the nanoscale. Her research in how materials interact with light and other forms of electro-magnetic radiation could drive innovations in electronics, energy, and space technologies.

Narang’s work builds on decades of advances in nanoscience that have brought the field closer to a long-held goal: the ability to engineer materials atom by atom. By studying these excited states, Narang is developing approaches that could lead to vastly improved materials. Applications could include improved reflectors and lenses for telescopes, lighter cell phones with better cameras, or synthetic fuels designed at the atomic level.

Menno Veldhorst, Delft University, Netherlands. He figured out how to make workable quantum circuits on silicon — a feat previously considered impossible. Veldhorst has invented a faster path to real-world quantum circuits by making it possible for them to be printed on silicon — the same way that computer chips have been made for decades. Quantum computers would allow powerful calculations that no traditional computer is capable of, but before Veldhorst’s innovation, it was considered impossible to make semiconductor-based quantum circuits on silicon that would be stable enough for useful computation.