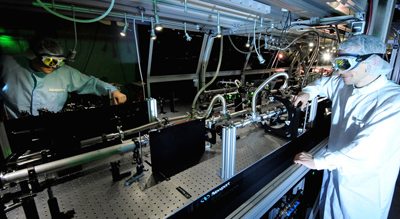 The optical table set up with which the team created attosecond pulses.

Physicists at the Max Planck Institute of Quantum Optics, the Ludwig Maximilians University, in Munich, and Sweden’s Umeå University have, for the first time, made use of plasmas consisting of relativistic electrons to generate isolated and highly intense attosecond laser pulses.

When a dense sheet of electrons is accelerated to almost the speed of light, it acts as a reflective surface. The team says that such a "plasma mirror" can be used to manipulate light. The physicists have characterized this plasma-mirror effect in detail, and exploited it to generate isolated, high-intensity attosecond light pulses. The work has been published in Nature Communications

The scientists note: "the interaction between extremely powerful laser pulses and matter has opened up entirely new approaches to the generation of ultrashort light flashes lasting for only a few hundred attoseconds. These extraordinarily brief pulses can be used to probe the dynamics of ultrafast physical phenomena at sub-atomic scales."

The conventional method used to create attosecond pulses is based on the interaction of near-infrared laser light with the electrons in atoms of noble gases such as neon or argon. But the new German-Swedish approach has yielded a new strategy for the generation of isolated attosecond pulses.

In the first step, extremely powerful femtosecond laser pulses are allowed to interact with glass. The laser light vaporizes the glass surface, ionizing its constituent atoms and accelerating the liberated electrons to velocities equivalent to an appreciable fraction of the speed of light.

The resulting high-density plasma consisting of rapidly moving electrons, which propagates in the same direction as the pulsed laser light, acts like a mirror. Once the electrons have attained velocities that approach the speed of light they become relativistic, and begin to oscillate in response to the laser field.

The ensuing periodic deformation of the plasma mirror interacts with the reflected light wave to give rise to isolated attosecond pulses. These pulses have an estimated duration of approximately 200 as and wavelengths in the extreme ultraviolet region of the spectrum (20-30 nm, 40-60 eV).

In contrast to attosecond pulses generated using longer laser pulses, those produced by the plasma-mirror effect and laser pulses that have a duration of few optical cycles can be precisely controlled with the waveform. This has allowed the researchers to observe the time course of the generation process; the oscillation of the plasma mirror. Significantly, these pulses are much more intense, that is they contain far more photons than those obtainable by the standard procedure.

The increased intensity makes it possible to carry out still more precise measurements of the behaviour of subatomic particles in real time. Attosecond light pulses are primarily used to map electron motions, and thus provide insights into the dynamics of fundamental processes within atoms.

The higher the intensity of the attosecond light flashes, the more information can be gleaned about the motions of particles within matter. With the practical demonstration of the plasma-mirror effect to generate bright attosecond light pulses, the authors of the new study have developed a technology, which will enable physicists to probe even deeper into the mysteries of the quantum world.