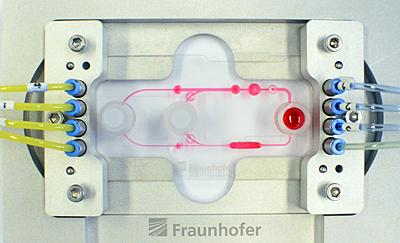 This microsystem, which has last week been awarded an EARTO Innovation Award at a ceremony in Brussels, simulates the blood circulation and the organs of animals or humans, potentially leading to the end of animal testing experiments.

The lab-on-a-chip, which relies on the laser cutting of simulated blood vessels and organs inside a microchip, is designed to help industry to develop new drugs and cosmetics more quickly than before. Dr. Udo Klotzbach, Business Unit Manager Microtechnology at Fraunhofer IWS, commented, “But what is even more important, we see good opportunities to eliminate the need for many animal experiments.”

In addition, this system could open the door to individualized medicine a little further, in which doctors can determine a personalized therapy for each patient within days instead of years.

IWS system developer Dr. Frank Sonntag says that the latest “parallel flow” version of the multi-organ chip also replicates the different levels of blood circulation in organs. And the European Association of Research and Technology Organisations considers this latest development to be groundbreaking and it expects considerable effects on economy.

The Association therefore awarded the multi-organ chip from Dresden the third prize in the competition for the EARTO Innovation Awards 2018 in the Impact Expected category in Brussels on 16 October.

Dr Klotzbach is convinced that "sooner or later animal experiments for the development of pharmaceuticals and cosmetics will be completely banned. The Netherlands is pioneer, other countries will follow.”

He added, “I therefore see great implementation potential for our system." Industrial laboratories and research institutes around the world have been trying for a long time to find a technological alternative to animal testing. In the race for the best multi-organ chips, countries such as the USA are sometimes investing hundreds of millions in such research and development.”

The Fraunhofer IWS began developing multi-organ chips in 2009. The Dresden Institute is now further ahead than others, as the EARTO award also underscores. In the meantime, using their laboratory chips the researchers have been able to simulate numerous natural organism processes in a comparatively complex way. These include in particular distributing active substances in the bloodstream and between the organs. 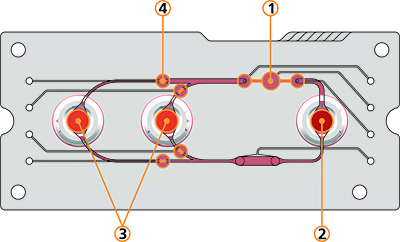 Components simulate interaction of blood circulation and organs in a human body.

The IWS engineers assemble their multi-organ chips from several layers. Using a laser, they first cut the subsequent blood vessels, the chambers for organ cells and other functional elements into plastic foils. They then stack these films on top of each other, connect them and add sensors, valves, pumps, connections, mass exchangers and electronic controls. The multi-organ chip assembled in this way measures about 10mm x 30mm.

Users from medicine, pharmacy or the beauty industry fill the chambers in these multi-organ chips with the cells of the liver, heart or other organs, for example. Then they start an artificial blood circulation and introduce their test substance.

In the interaction between the simulated organs, they can analyze how an animal or a human being would react to the new drug or beauty product. Such a technical replica does not completely replace the test on the living organism. However, the chip can make many animal experiments superfluous in the long run leading to market approval.

This microfluidic system has already proven itself in numerous medical practice tests. "Our partners at Dresden University Hospital tell us that the cells tested in our chips are viable for about a month," added Dr Klotzbach.

"In the human body, the different body parts, organs and tissues, require different amounts of blood," said Dr Sonntag, the developer behind the concept. "The brain, for example, receives much more blood than the eyes. In addition, the human organs are not connected in series but have parallel blood supplies. Therefore, the team has now connected the organ chambers on the chips with parallel channels whose flow rates can be regulated individually.

Microscopically small valves also make it possible to simulate heart attacks: Using software commands, users can block certain blood vessels to check, for example, how and in what time nerve cells react to a stroke. "The next step is to integrate additional sensors," said Dr Klotzbach. He is now considering components that could enable certain analyses to be carried out directly on the chip itself. "We also want to integrate machine learning concepts in order to improve the analysis results."