System based on quantum cascade laser said to offer 'unprecedented' speed of analysis. 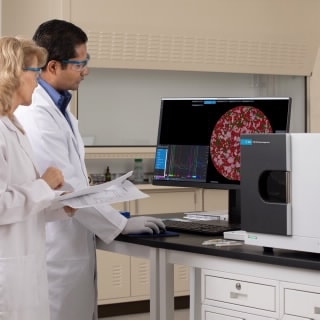 Analytical chemistry equipment giant Agilent Technologies has released a new tool based around a quantum cascade laser (QCL) that it says represents a breakthrough in spectroscopic chemical imaging.

Aimed primarily at applications in the pharmaceutical industry, the “8700 LDIR” kit combines the QCL with rapid scanning optics to extract useful information about active pharmaceutical ingredients, as well as polymorphs, salts, and defects - enabling users to quickly identify and resolve issues experienced during drug development.

“Simply put, the 8700 has the potential to enable labs to bring pharmaceutical products to market faster and with greater confidence in their formulations,” announced the NYSE-listed firm.

No liquid nitrogen
Phil Binns, a company VP and general manager of Agilent’s spectroscopy division, added: “This ‘walk-up’ solution provides high-definition chemical imaging more rapidly and accurately than ever, to aid in analyzing the composition of tablets, laminates, tissues, polymers, and fibers.

“With this information, scientists can analyze more samples and in greater detail in minutes instead of hours.”

The 8700 LDIR is also said to produce images free from laser coherence artefacts, to provide high-definition images across large sample areas. At the same time, it is compact in size – partly because its mercury cadmium telluride detector is cooled electrically and does not require any liquid nitrogen – and aimed at spectroscopy experts and non-experts alike.

“Now users can minimize time spent on sample analysis and data review, which leads to increased productivity,” stated the firm. “Simple load-and-go methods also save time and make it ideal for walk-up use in both commercial and academic settings.”

The 8700 LDIR operates in either reflectance or attenuated total reflectance (ATR) mode, automatically switching between the two by directing the incident beam to the appropriate objective.

Users can also switch between large-area imaging and focusing on small areas of interest without needing to change any of the system optics.

“The movement of the sample relative to the beam is fully automated, [and] this process yields a high-quality two-dimensional molecular image in a remarkably short time period,” Agilent explains. “The 8700 LDIR has two visible channels: a large-field-of-view camera to obtain an entire view of the sample, and a microscope-grade objective to capture high magnification detail.”

Quality control
The outcome for drug production provides the ability to rapidly check the distribution of an active ingredient across a tablet, ensuring quality control, as well as assisting anti-counterfeiting efforts.

Other applications include biomedical research, for example imaging cells, tissues, cartilage, or bone samples, and locating defects or impurities in biopolymers.

Because the QCL works in the mid-infrared spectral range, it can access the “fingerprint” spectroscopic characteristics of any material present – meaning that unknown materials can be identified using either commercial or customized library software.

In materials science, the 8700 LDIR could perform a similar role, and is said to be capable of determining layer identity and thickness down to a depth of 3 µm.

In an application note posted on the company’s web site, Agilent describes the potential of the system for imaging laminate material, with the ability to identify all the different layers present.

• Agilent has also signed a deal to acquire flow cytometry equipment specialist ACEA Biosciences for $250 million in cash. The San Diego firm, which has a large manufacturing operation in China, sells a variety of fluorescence-based cytometer analysis systems based around multiple lasers - the latest being its four-laser, 25-channel "Quanteon" system.

* updated (October 8th): The original version of this article stated that the Agilent 8700 LDIR incorporated a two-dimensional focal plane array detector. This is incorrect. It employs a single-element electrically cooled detector.