Fraunhofer-led project develops displays for VR and other applications. 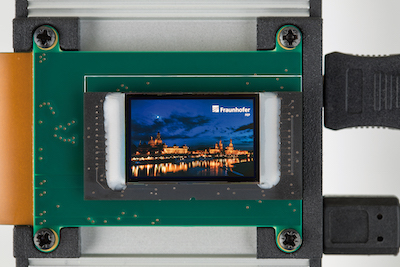 A prototype virtual reality (VR) headset on show during this month's Augmented World Expo Europe conference in Munich, Germany, will demonstrate large-area high-resolution OLED microdisplays intended to be suitable for the next generation of compact VR glasses.

The headset uses OLED/CMOS microdisplays developed by the LOMID project, a consortium led by Fraunhofer FEP as part of Europe's Horizon 2020 research program.

Each one-inch display has a resolution of 1920 x 1200 pixels, and the headset combines two display chips per eye, delivering a total WUXGA wide-screen resolution of 4800 x 1920 pixels for the wearer.

VR headsets are potentially attractive for both consumer and industrial uses, but to date the hardware has tended to be heavy and cumbersome, and the images seen by wearers have suffered from low frame rates and flickering images, leading to an unsatisfactory VR experience.

The LOMID project, named for "Large cost-effective OLED microdisplays and their applications," was created to address these challenges, by developing large-area OLED microdisplays and associated free-form optics to provide an ergonomic and lightweight solution for the design of VR glasses, capable of delivering higher and more suitable frame rates for users.

"Current AMOLED smartphone display technology is limited to about 600 pixels per inch," commented Uwe Vogel of Fraunhofer FEP. "That may rise in the future, but the reliance on charge carrier mobility of the underlying backplane thin-film transistors means that existing OLED technology can probably only achieve around 1000 to 1500 ppi maximum. VR requires higher values than that, and although there have been some demonstrations of displays that push towards the values needed, they are not yet suitable for commercial products."

The LOMID consortium tackled this challenge by developing a single-crystalline silicon CMOS backplane for the display to boost display resolution and refresh rates, undertaken in particular by project partners Fraunhofer FEP, Microoled of France, and X-Fab of Germany. Improvements to the OLED deposition process itself were also made, intended to reduce costs by improving the manufacturing yield.

The specialist optical systems needed to incorporate the displays into VR hardware, and to optically combine and match the displays in pairs for each eye, were developed by Limbak, a spin-out from the University of Madrid specializing in VR technology.

The end result of the collaboration is an active matrix OLED microdisplay measuring one-inch diagonally, delivering resolution of 1920 by 1200 pixels, and featuring a pixel density of 2300 ppi. The 2 x 2 sub-pixel structure designed by Fraunhofer FEP achieves a dot pitch of 5.5 microns and a pixel pitch of 11 microns. The VR headset on show in Munich combines two such microdisplays for each eye, allowing the wearer to see 4800 × 1920 pixels in total, which is close to 5K resolution.

One particular breakthrough made by Limbak has been to decrease the distance between the OLED display and the wearer's eye to 37 millimeters, rather than the 60 to 70 millimeters found in most commercial headsets. This contributes to a significant reduction in the size and weight of the overall headset.

"LOMID was intended to develop the components needed for these microdisplays and applications, along with the backplane technology they required, and the project has now concluded," said Uwe Vogel. "Commercialization of the technology we have developed could now follow several different paths, for the different aspects of the system."

Those paths could include further applications outside the VR sector, through consortium partners and OLED micro-display specialists Microoled, or commercial exploitation of the backplane technology developed by X-Fab. A group at the University of Oxford's Nuffield Department of Clinical Neurosciences was also a LOMID partner, as the technology may offer routes to providing headset displays for patients suffering from certain eye diseases, as a means to tackle loss of vision.

"These different markets will require different commercialization strategies, but the intention was always for the project to sit close to market, aware of potential applications and exploitation of the technology, rather than remain as focused on the basic research as some Horizon 2020 projects are designed to do," commented Vogel. "Further qualification work is still required now the project is concluded, but the results have already persuaded project partners to invest further in the technology for potential future products in their own markets, which is very encouraging."