Venture capital round and company reorganization completed in response to ‘surging’ demand for laser machines used in automotive sector. 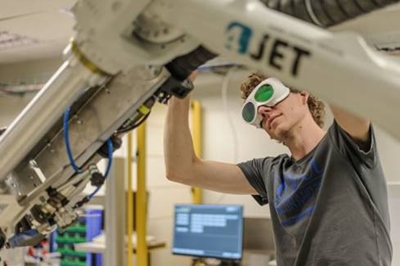 Tire marking to micromachining
4JET has enjoyed particular success in the automotive sector, where laser equipment provided by its “4JET Technologies” subsidiary is widely used to mark tires and clean tire molds.

The company’s other subsidiary, “4JET microtech”, was set up in 2016 and is focused on systems for micromachining applications, including laser processing of solar cells and technical glass.

Founded in 2006, 4JET currently employs approximately 130 staff across Germany, China and the US, and estimates that so far it has installed more than 400 laser machines in around 40 different countries.

Headquartered close to Aachen on the border with the Netherlands, its micromachining division runs a job shop in Prutting near Rosenheim in Bavaria, where it is able to showcase its latest laser technology.

According to the company this latest venture investment is primarily geared towards further expanding its global delivery platforms for sales and service, and also to accelerate development initiatives.

In parallel, and in the face of what the company describes as “surging” demand for its products and services, 4JET has completed a corporate reorganization intended to ensure that it operates with greater efficiency while it grows rapidly.

Growth story
The company predicted: “Driven by multiple underlying trends towards increased usage of functional glass coatings, a push for tire traceability, as well as a steady rise in the number of use cases for laser cleaning technology, both divisions of 4JET will contribute to a 40 per cent growth in revenues for 2018, with 2019 expected to be another bumper year.”

CEO Jetter added: “4JET has been a growth story since the beginning and we’re confident that this is set to continue for the foreseeable future, especially so with Jolt’s investment and added value. Given their impressive track record as high-tech hardware investors, teaming up made a lot of sense, and already we’re seeing the benefits of this.”

The Paris-based venture capital firm has already enjoyed a successful exit with a photonics-based portfolio firm, through the sale of micro-optics sensor developer Heptagon to Austria’s AMS in late 2016. Another key investor, Münster-bsaed eCapital, first backed 4JET a decade ago.

Jolt Capital partner Antoine Trannoy commented: “4JET’s growth to date, built from strong market demand for its technology and integrated offering, underpinned by strong intellectual property, is the perfect example of what we like at Jolt. Knowing well the challenges and opportunities facing hardware companies, Jolt Capital is delighted to be partnering with 4JET for the next phase of expansion.”

On-site services
Back in February this year, 4JET announced a strategic cooperation with specialist industrial services provider LY-Holding, under which the two firms are offering on-site laser cleaning processes for tire molds.

Under the scheme, tire manufacturers are able to deploy cutting-edge laser technology without having to take on the risk of making an initial investment, and LY was earmarked to install a 4JET laser system at an European tire plant in the first half of 2018.

With an existing presence in more than 40 tire manufacturing facilities globally, 4JET is hopeful that the cooperation will grow significantly.

That was followed up in May with the launch of the flexible “JETLASER” cleaning system, available in power levels ranging from 100 W to 2 kW of average laser power and optimized for either manual use or integration with a robot.

The systems are based around fiber-coupled Nd:YAG lasers operating at 1064 nm, delivering up to 50 mJ of energy per 100 ns pulse.