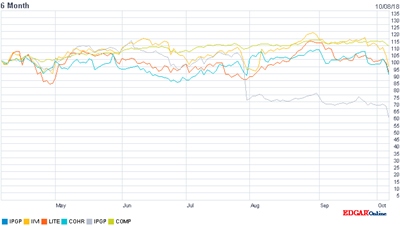 IPG stock versus peers and Nasdaq (click to enlarge)

IPG Photonics, the Nasdaq-listed firm that dominates the market for fiber lasers, has seen more than a billion dollars wiped off its value after updating sales guidance for its latest financial quarter.

On October 5, a day that saw US stock markets under wider pressure on fears of rising inflation, IPG’s stock price slumped by 13.8 per cent when the company said that sales in the three months ending September 30 would be $356 million at most – below the $360 million-$390 million range it predicted in July.

Tariff headwinds
Explaining the anticipated shortfall, CEO and founder Valentin Gapontsev blamed the current geopolitical and macroeconomic environment – and more specifically the introduction of tariffs and the strength of the US dollar against Chinese currency.

“These tariff and trade-related headwinds were the primary driver of weaker than expected performance for our business in China and Europe,” he added, with IPG also pointing out that the foreign exchange effects seen over the past two months would impact quarterly sales by around $5 million.

Back in July, Gapontsev had told an investor conference call that applications in electric vehicle battery welding and laser additive manufacturing were expected to weaken significantly in the second half of this year.

While the Massachusetts-headquartered laser company remains extremely profitable, Gapontsev warned that IPG’s sales in the full year might end up missing the 7-9 per cent range of annual growth previously forecast.

That annual growth target had already been pegged down from an earlier prediction of 10-15 per cent, and would represent a major slowdown from last year, when IPG registered a remarkable 40 per cent leap in revenues to around $1.4 billion.

For IPG, it would also represent the company's slowest annual revenue growth since the immediate aftermath of the global financial crisis in 2008 - which prompted a near-20 per cent dip in 2009. Since then, its sales have risen at a compound annual average growth rate of close to 25 per cent.

Wider malaise
Having dropped to just under $133 on the Nasdaq, IPG’s stock price has now lost half of its value since hitting an all-time high of $264.11 in January this year. It had, however, risen in value just as rapidly ahead of that high: the latest fall returns the company’s valuation to that seen in April 2017.

The combination of IPG’s announcement and inflationary fears appeared to drag down a number of other laser company stocks, with Coherent closing the October 5 session nearly 9 per cent down. Like IPG, the more diversified laser firm has shed half its market valuation since January.

Meanwhile II-VI and Lumentum each saw their stock prices drop by around 8 per cent, with Nasdaq newcomer nLight down 10 per cent and now trading lower than at any time since it completed its initial public offering (IPO) in April.

Each of the companies mentioned is scheduled to announce its latest quarterly results and provide shareholders with more insight on the current market trends in the next month or so.