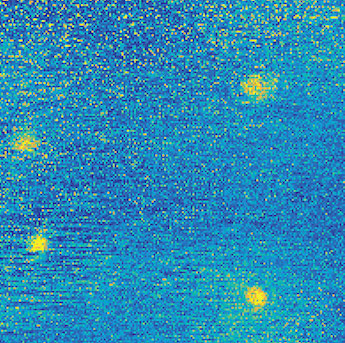 Multiple ways to surpass the inherent diffraction limit in imaging have been developed in recent years, and the growing importance of these super-resolution methods was recognized by the award of the 2014 Nobel Prize in chemistry to a trio of the pioneering researchers in the field.

One approach to imaging at the nanometer scale has been to exploit intensity-dependent molecular switches, and use lasers of different wavelengths to trigger fluorescence in certain areas of a structure while inhibiting it in others.

Under the right circumstances, the area fluorescing under this scenario can shrink to a size smaller than the diffraction limit. This approach lies behind the STED technique developed by Stefan Hell and related methodologies, which exploit an incoherent response to the lasers.

A team from Ruhr-University Bochum (RUB) and the University of Basel has now developed a technique which relies instead on a coherent response, and demonstrated how this can enhance super-resolution performance. The work was published in Nature Photonics.

The team successfully applied its principle to a solid-state system containing quantum dots, semiconductor particles that are only around ten nanometres in size. Single electrons can be confined in structures on this scale, and can only assume specific energy levels, creating in effect a quantum-mechanical two-level system.

This is in contrast to the STED method, which works through the occupation of at least four different energy levels in its fluorophore species when they receive laser excitation. Two-state systems of the kind examined in the new study are useful models for certain important experiments in quantum mechanics.

Next-level super-resolution
"In the case of Stefan Hell’s technique, the molecules are switched into a long-lasting metastable dark state, but we avoided this on purpose by analyzing a short state in the quantum dots that lasted only one nanosecond,” said Arne Ludwig of RUB. "For this purpose, it was necessary to develop an optical switch that controls artificial atoms on the quantum level."

Exciting these quantum dots with chirped laser pulses of changing frequency successfully switched the fluorescence on and off, by initiating a phenomenon termed a rapid adiabatic passage, in which the energy levels of a quantum dot are inverted in a controlled manner.

According to the team, use of the new approach achieved a resolution "equal to just 1⁄31 of the wavelength of the utilized light." And unlike STED microscopy, the new method releases no heat.

"This is a huge advantage, as any heat released can destroy the molecules you are examining,” commented Richard Warburton of the University of Basel. “Our nanoscope is suitable for all objects with two energy levels, such as real atoms, cold molecules, quantum dots, or color centers.”

Establishing rapid adiabatic passage as a technique in the super-resolution toolbox could be an important step towards applying quantum switches in microscopy, even when the switches have no metastable states. It could also allow the quantum switches to be used as control elements on the nano scale, perhaps in scenarios where artificial atoms act as quantum information units.

"This takes Stefan Hell’s microscopy approach to the next level," said Warburton. "It is thus possible to conduct nanoscale analyses for almost every quantum system."