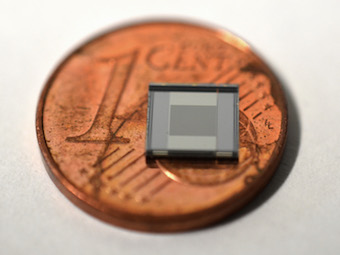 Accurate measurement of electric field strength is vital for many applications, but existing sensor architectures can be bulky and difficult to calibrate.

A project at TU Wien has now developed a new field strength detector that could offer an improved route to measuring this key parameter, based around microelectricalmechanical (MEMS) technology. The work was published in Nature Electronics.

"The equipment currently used to measure electric field strength has some significant downsides," said Andreas Kainz of TU Wien. "These devices contain parts that become electrically charged, but conductive metallic components can significantly alter the field being measured. This effect becomes even more pronounced if the device also has to be grounded to provide a reference point for the measurement."

The new design takes a different approach, employing a purely passive MEMS device and exploiting the effect of electrostatic induction on small silicon grid structures measuring just a few microns in size. These are attached to a small spring, and when the silicon is exposed to an electric field, a force is exerted on the silicon crystals and the spring is slightly compressed or extended.

Mass production techniques
This mechanical displacement can then optically tracked, by observing the change in a LED light beam passing through the structure. An additional fixed grid is positioned above the silicon masses, so that when the silicon below moves under the influence of the electric field, the emerging light flux is modulated. This variation can is used to measure the electric field strength causing the displacement.

In the published paper, the team note than the new device can be used for fields of relatively low frequency, up to one kilohertz. "Using our prototype, we have been able to reliably measure weak fields of less than 200 volts per metre," said Kainz. "This means our system is already performing at roughly the same level as existing products, even though it is significantly smaller and much simpler."

MEMS technology should allow the new sensor to be manufactured using relatively cheap silicon micromachining techniques and mass production methods, making it available to a number of applications across environmental monitoring and personal security.

Meteorology is another target sector, where the sensor may help to answer some open questions in lightning research about the local electric field before and during thunderstorms, and lead to mobile devices able to provide warning of lightning strike. Similar devices may also be valuable to indicate the proximity of high-voltage power lines.

"Other methods of measurement are already mature approaches, but we are just starting out," commented Kainz. "In the future it will certainly be possible to achieve significantly better results with our microelectromechanical sensor."