New technique allows an OCT platform to image both the retina and the anterior chamber of the eye. 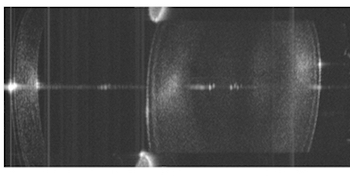 Optical coherence tomography has become a standard technique in ophthalmology, thanks to its easy fit with clinical workflows and the ability to image particular zones of the eye, such as the anterior chamber and the cornea.

Use of the same technique to image the whole eye has proved challenging. OCT's limited imaging depth can be improved though Fourier domain methods and use of modern swept-source laser sources, but the optics of the eye prevent the focusing of light on both the anterior chamber and the retina simultaneously without sacrificing resolution.

A project from Poland's Nicolaus Copernicus University and a group at the University of Murcia in Spain led by Pablo Artal has now developed a possible solution, a platform combining swept-source OCT and an electrically tunable lens (ETL) that allows imaging and biometry of the whole eye. The work was published in Optica.

"Although there have been trials reported in the past on the application of ETLs in OCT, we have carried out a thorough investigation of ETL performance in different designs of OCT system, and demonstrated how image quality can be improved when focus tuning is applied." said Ireneusz Grulkowski of Nicolaus Copernicus University.

"We also showed for the first time that it is possible to compensate for the light refraction in the eye, and therefore possible to combine two optical configurations - one for imaging of the anterior segment and a second for retinal imaging - in one simple design. Previous attempts at whole-eye imaging have used two separate illumination beams, but our approach is based on switching the focus between the front and the back of the eye."

The ETL used by the project came from component developers Optotune, and was chosen for its tuning range and suitability for the wavelengths of illumination being used. It was then positioned in different locations in the system's optical path, depending on which area of the eye was to be imaged. Anterior imaging used the ETL as the objective lens, while for retinal imaging the ETL and an additional offset lens were positioned before the platform's galvanometric scanners, in order to deliver a collimated beam to the back of the eye.

Whole-eye imaging
Quasi-simultaneous imaging of the whole eye was achieved using the retinal imaging configuration, but moving the ETL and offset lens further back to provide greater beam divergence. From that position, the resulting beam at the pupil plane could be either collimated (via low ETL current) or focused (high ETL current), with images of the anterior segment and retina acquired alternately.

This approach tackles the major barrier in development of whole-eye imaging systems, the impossibility under normal circumstances of focusing light on both areas of interest due to the natural refractive power of the eye itself.

"Most other proposed solutions to whole-eye imaging have been based on the actual integration of two separate interface designs, to obtain scanning of the anterior segment and the retina simultaneously," commented Grulkowski. "The novelty in our system is the implementation of a single element that enables switching between the scanning modes."

In initial tests on seven subjects, the new platform was used to produce both OCT images and key biometric measurements, such as corneal thickness, anterior chamber depth, and lens thickness. The correlation between results from the system and those from a standard commercial biometer was assessed, and found to be excellent.

The next steps will include optimizing the scan areas and developing methods to automatically measure the key dimensions of the eye, along with incorporation of more advanced ETLs. The team will also tackle the imaging of the eye's vitreous body, the clear gel that fills the eye's rear chamber between the lens and the retina.

"Our proof-of-concept system illustrates the possibility of changing the operational mode of the instrument by setting the focal distance of the tunable lens, and has proved that the focus tuning can effectively enhance the image quality in OCT images," Grulkowski commented. "We now plan to optimize the performance of this approach for vitreous imaging. This is quite challenging, since the vitreous is a transparent medium in the eye, but we believe that our approach will open new perspectives in understanding both diseases of the vitreous and the vitreo-retinal interface."