For precise control of optical atomic clocks outside the lab, with various measurement benefits. 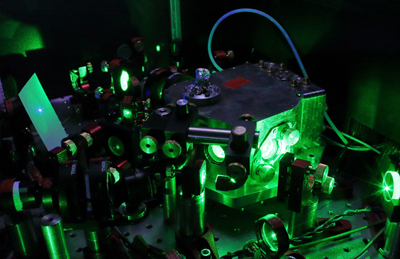 Good to go: Set up of the optical atomic clock developed at PTB's QUEST Institute.

German research center Physikalisch-Technische Bundesanstalt (PTB), Based in Braunschweig, is well known for providing accurate time, such as for radio-controlled clocks. For this purpose, it runs some of the best cesium atomic clocks in the world. At the same time, PTB is already developing various atomic clocks of the next generation.

These clocks are no longer based on a microwave transition in cesium, but they instead operate with other atoms that are excited using optical frequencies. In a significant step forward, some of these new designs of clock can even be transported to other locations.

At its QUEST Institute, PTB is currently developing a portable optical aluminum clock that is designed to measure physical phenomena such as the red shift, as predicted by Einstein, outside the laboratory. A prerequisite for this is that the required lasers can cope with transportation to other locations.

PTB physicists have therefore developed a frequency-doubling unit that will even continue to operate when it has been shaken at three times the Earth's gravitational acceleration. The results have been published in Review of Scientific Instruments.

It was Einstein who discovered that two clocks that are located at two different positions in the gravitational field of the Earth will tick at different speeds. What initially sounds like a bizarre idea has quite practical effects and banefits: Two optical atomic clocks having an extremely small relative measurement uncertainty of 10-18 can measure the difference in height between arbitrary points on the Earth at an accuracy of just one centimeter.

This so-called “chronometric levelling” represents an important application of clocks in geodesy. One of the prerequisites for this is that the optical frequencies of the two clocks can be compared e.g. via glass fibers.

PTB is currently developing several different types of atomic clocks that can each be transported in a trailer or in a container. Their operation outside a protected laboratory environment, however, poses many challenges.

The ambient temperature, for example, is much less stable. Furthermore, significant physical shocks may occur during transportation. This is why optical structures that have worked perfectly well in the laboratory may initially be unusable at the destination. They must painstakingly be readjusted – which leads to a loss of valuable research time.

This last problem concerns in particular the transportable aluminum clock that is being developed at the QUEST Institute. This clock requires, among other things, two UV lasers operating at 267 nm. For this wavelength, it is not possible to simply buy a laser diode. Instead, a long-wave infrared laser must be frequency-doubled twice in succession.

During this process, the light is coupled into a closed ring of four mirrors so that a high optical power is circulating within the ring. A non-linear crystal placed in this ring transforms the circulating light into light of half the wavelength. Due to the dichroic coating of the mirror, it passes out of the resonator and is then used for reading the clock.

The QUEST Institute has developed a design for this so-called frequency-doubling cavity, which is based on a monolithic – and therefore highly stable – frame onto which all mirrors and the crystal are mounted. The set-up is sealed to be gas-tight to the outside in order to protect the crystal, which is highly sensitive even to the slightest contaminations.

The developers of the cavity were able to demonstrate on a prototype that it also doubles the laser light while it is exposed to accelerations of 1g. Furthermoe, it was shown that the frequency doubling efficiency is not impaired after being subjected to accelerations of up to 3g for 30 minutes.

This corresponds to five times the value stated in Standard ISO 13355:2016 about road transportation on trucks. The cavity is, however, not only mechanically robust, but it is just as efficient as comparable systems that have been developed by research groups of other institutes. Moreover, 130 hours of uninterrupted continuous operation was demonstrated.

In view of these properties, the QUEST Institute has made several of these doubling cavities for different wavelengths (not only for UV) which became integral components of various quantum-optical experiments, with the aim of providing these experiments reliably with laser light. Moreover, a German optomechanics company has licensed the design in order to use it as a basis for a commercial product.