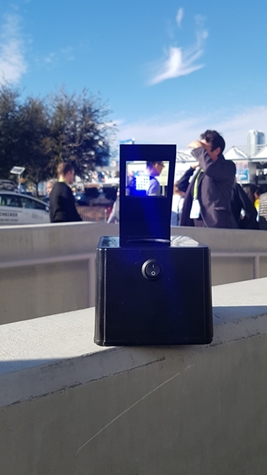 The partnership with LED company Plessey will see the two companies – both based near Plymouth in the southwest of England – working on a new approach to augmented reality (AR) head-up displays (HUDs).

Plessey unveiled the GaN-on-Si microLED approach at the recent Consumer Electronics Show (CES) in Las Vegas. Its CTO Keith Strickland claimed during the event: “Monolithic microLED technology using GaN-on-Si is the only viable solution that can enable products that are not only compact enough to be worn without restricting the overall experience for AR and VR applications and in HUDs, but also provide the size, weight, power and luminance needed.”

Monolithic approach
The LED technology developer is pursuing an extensive licensing program for the GaN-on-Si approach, and is aiming to manufacture the first fully monolithic microLED display.

The company explains that one of the main challenges in making such displays with a non-monolithic approach is the placement of LED chips onto a CMOS backplane, which demands a pick-and-place approach.

“This involves the individual placement of every LED on a pitch of less than 50µm, requiring new and expensive equipment that is subject to productivity issues,” states Plessey. “As the pixel density of displays increases and pitch reduces, pick-and-place becomes less feasible both commercially and technically.”

Adopting the monolithic process would remove and need for chip placement and, it is claimed, will enable smaller and higher-resolution displays for virtual and augmented reality (VR/AR), and HUDs.

“GaN-on-Si is the only technology that makes sense in terms of scalability and performance,” said Strickland during the Las Vegas trade show. “It offers better thermal conductivity than sapphire and higher luminosity than OLED [organic LED], which is why this technology is widely acknowledged to be the only one that can deliver high-resolution, high-luminance displays.”

Plessey’s CEO Michael LeGoff added: “Working with Artemis on this solution has put us across a cultural chasm, by bringing together the HUD technology, most widely used for defense applications, and our microLED expertise to benefit the augmented reality industry.”

Metamaterials laser protection
Artemis’ deal with MTI, which is headquartered in Halifax, Canada, but has an office in London, UK, will see the two firms partner on a hybrid coating for defense applications.

“The companies are pairing up to harness both of their innovative thin-film coating technologies, to create a brand new, hybrid meta filtering solution to combat laser threats for the users of periscopes and sighting systems in armored vehicles,” explained Artemis.

It predicts that the combination of Artemis’ thin-film deposition expertise and MTI’s metamaterials will result in better laser protection filters than are currently available.Artemis is qualified to supply the US military with laser protection filters, and has also provided the UK’s Ministry of Defence with the technology for all of its front-line armored vehicles, as well as their equivalents in Norway and France. In 2016 the company signed a major deal with defense giant BAE Systems that is helping to fund a significant expansion.

MTI’s CEO and founder George Palikaras said of the development deal: “We look forward to combine MTI’s strength in flexible, large-scale filters with Artemis Optical, [which] is an established leading supplier in optical thin-film coatings, to develop the next generation of laser filters. The combination of our technologies will offer unique capabilities for the defense industry globally.”

Artemis’ sales director Jamie Pindard added: “We’re very excited about this high-tech collaboration. Both companies have already proved their technology in their respective fields. The potential of these new hybrid solutions could prove to be a step-change in the way that the industry considers the possibilities of laser protection.”

• Artemis Optical and Plessey Semiconductors will be among the visitors at next week’s SPIE Photonics West. The giant conference and technology exhibition takes place at the Moscone Center in downtown San Francisco.