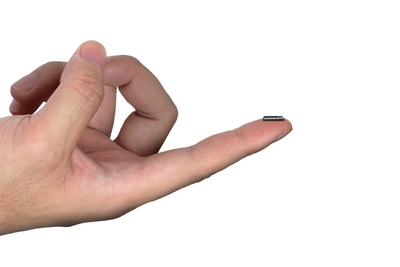 Pyreos, the Edinburgh-headquartered maker of thin-film infrared sensors, is to develop a new and more sensitive generation of the pyroelectric devices, thanks to a near-£1 million research project funded by Innovate UK.

The firm, spun out from German industrial giant Siemens a decade ago, is collaborating with nanotechnology experts from the highly regarded thin-film technology group at Imperial College, London, as well as an unspecified provider of sputtering equipment. The UK’s new “Industrial Strategy Challenge Fund” is the source of the financial support.

Sensitivity boost
The plan is to further enhance the capabilities of the ultra-sensitive “PZT” materials used in the production of pyroelectric thin films. PZT is shorthand for lead zirconium titanium oxide, a piezoelectric ceramic material with a multitude of applications in photonics and elsewhere.

Located at the Scottish Microelectronics Centre, part of the University of Edinburgh’s Kings Buildings campus, Pyreos says it is the world’s only supplier of thin-film pyroelectric sensors. As well as Siemens, its backers include the venture wing of Robert Bosch and the Scottish Investment Bank.

The company’s devices feature in a wide variety of industrial and consumer products, for example spectrometers used to analyze foodstuffs, engine oils and blood, as well as switches and other electronics for detecting gestures and presence.

“The new project combines Imperial College’s expertise in thin-film deposition control, characterization and analysis, with Pyreos’ skill in sensor development,” said the firm, adding that the work should help it to consolidate its position in markets like gas and flame, food safety and oil and fuel analysis, alongside motion detection and gesture recognition. “[The project may] eventually open up more opportunities in imaging,” it added.

Better uniformity
Imperial staff working on the project include Roger Whatmore, a visiting professor and senior research investigator within the university’s Department of Materials. Whatmore was previously CEO of the Tyndall National Institute in Cork, Ireland, and has particular interest in ferroelectric materials and applications.

“The aim is to advance the general understanding and technology surrounding thin-film pyroelectric oxides, piezoelectric and ferroelectric oxides, with a view to further enhancing product uniformity, repeatability and stability,” Pyreos added.

New process control and monitoring capabilities are also expected to pave the way for establishing a new level of volume manufacturing.

Pyreos CTO John Phair summed up: “The purpose of the project is to advance state-of-the-art techniques of depositing thin-film pyroelectric oxides and piezoelectric and ferroelectric oxides generally, in order to obtain thin films with enhanced performance characteristics, substantially improved uniformity, repeatability and stability for volume manufacturing compared to what is available today.”