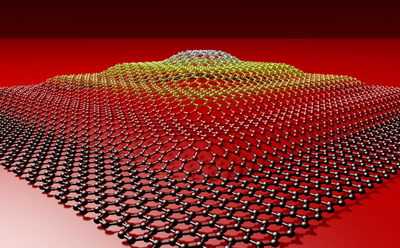 Pyramid made from graphene.

Researchers from the University of Jyväskylä, Finland, in collaboration with researchers from Taiwan have discovered how graphene, usually considered to be a single atom-thick, two-dimensional structure of carbon atoms, can be forged into three-dimensional objects by using laser light.

The development partnership has come up with a new laser writing technique to help make new products containing graphene. The results have been recently published in Nano Letters.

Graphene can be used to make a variety of electronic and optoelectronic devices, such as transistors, photodetectors and sensors. The researchers commented, “In future, we expect to see an increasing number of products containing graphene.”

The novel form of 3D graphene is stable and it has electronic and optical properties that differ from 2D graphene. The researchers add, “Optically-forged graphene opens the way for fabrication of 3D architectures for graphene-based devices.”

A notable example of this has been provided by the team’s fabrication of a pyramid with a height of 60 nm, which is about 200 times larger than the thickness of a graphene sheet.

“We call this technique optical forging since the process resembles the forging of metals into 3D shapes by a hammer. In our case, a laser beam is the hammer that forges graphene into 3D shapes,” said Professor Mika Pettersson, who led the experimental team at the Nanoscience Center at the University of Jyväskylä.

“The beauty of the technique is that it is fast and easy to use, and it does not require any additional chemicals or processing. Despite the simplicity of the technique, we were very surprised initially when we observed that the laser beam induced so substantial changes on graphene. It took a while to understand what is really happening,” he said.

“In the beginning, we were flabbergasted. The experimental data simply made no sense, but gradually, by close interplay between experiments and computer simulations, the actuality of 3D shapes and their formation mechanism started to clear up,” said Dr Pekka Koskinen, also from the Nanoscience Center, who was responsible for the theory. 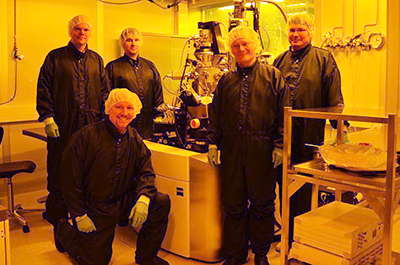 The research was conducted at the Nanoscience Cente, University of Jyväskylä by Andreas Johansson, Pasi Myllyperkiö, Pekka Koskinen, Jukka Aumanen, Juha Koivistoinen, Vesa-Matti Hiltunen, Jyrki Manninen and Mika Pettersson, at the National Central University of Taiwan by Hung-Chieh Tsaiand Wei Yen Woon and at the National Synchrotron Radiation Research Center, Taiwan by Chia-Hao Chen and Lo-Yueh Chang. It was supported financially by the Academy of Finland and Ministry of Science and technology of the Republic of China.

The Nano Letters paper concluded, “Atomically thin materials, such as graphene, are the ultimate building blocks for nanoscale devices. But although their synthesis and handling today are routine, all efforts thus far have been restricted to flat natural geometries, since the means to control their three-dimensional (3D) morphology has remained elusive.

Here we have shown that, just as a blacksmith uses a hammer to forge a metal sheet into 3D shapes, a pulsed laser beam can forge a graphene sheet into controlled 3D shapes in the nanoscale. The forging mechanism is based on laser-induced local expansion of graphene, as confirmed by computer simulations using thin sheet elasticity theory.”