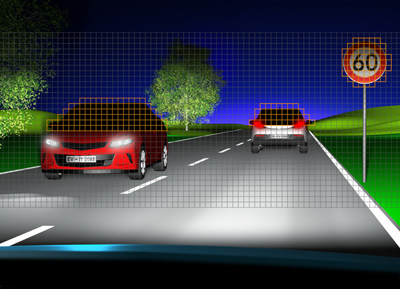 A prototype hybrid LED lamp is able to provide “smart headlighting” to avoid dazzling other drivers. The system called Eviyos, developed by Osram Opto Semiconductors (OS), is claimed to be the world’s first such hybrid LED.

As soon as oncoming traffic is detected by a forward-facing sensor the appropriate pixels are automatically switched off so approaching drivers are not dazzled.

The prototype, integrated into a demonstrator from Osram Specialty Lighting, will be on show for the first time at the ISAL automotive lighting symposium, which runs from September 25 through 27, 2017 in Darmstadt, Germany.

Eviyos has its basis in the µAFS research project which was completed in the fall of 2016. The project involved various partners from the industrial sector and was coordinated by Osram OS. The prototype combines two technologies in one component: a light emitting chip and individual pixel control electronics.

This combination means that the 1,024 pixels of Eviyos plus the driver are all accommodated in a footprint of approx. 4 x 4 mm. The light source has minimum luminous flux per pixel of 3 lm at 11 mA. Initial prototypes have already exhibited more than 4.6 lm per pixel.

Customers can vary the number of hybrid LEDs in their applications and supplement them with conventional LEDs, depending on the particular requirements that need to be met. 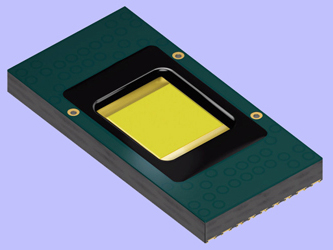 Eviyos LED prototype is set to

Thomas Christl, Marketing Manager at Osram OS, commented, “With Eviyos, we are helping to make the roads safer and improve comfort and convenience for drivers.

“We are pleased that we can present the first prototype so soon after completing the research project. We are now another stage further toward series production,” he added.

Eviyos is also energy-efficient thanks to the precise control and dimmability of the individual pixels. The only pixels that are “on” are the ones that are actually needed at the time.

At its planned commercial launch at the start of 2020 Eviyos is expected to form a separate product family offering a range of possible applications: smart headlights are just one of the potential areas in which intelligent selective pixel control could be applied.