Toyota Research Institute deploys high-fidelity lidar system from the US startup in its groundbreaking 'Guardian' and 'Chauffeur' vehicles. 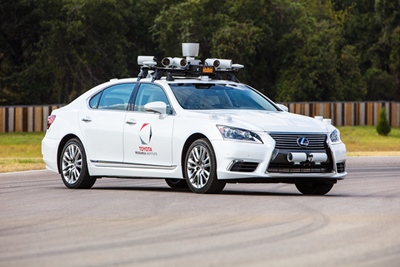 Luminar on board: the new TRI platform

Toyota, the world’s largest auto manufacturer, is working with the venture-backed lidar system developer Luminar Technologies, as part of its bid to advance the performance of self-driving vehicles.

The Japanese firm’s US development wing, the Toyota Research Institute (TRI), is this week demonstrating the latest progress on its “Guardian” and “Chauffeur” vehicles to the investor community.

TRI’s CTO Jason Kuffner said in a statement from the two companies: “We moved swiftly and early to adopt the Luminar platform into our fleet, and as a result we’re rapidly advancing our program.”

“The level of data fidelity and range is unlike anything we’ve seen and is essential to be able to develop and deliver the most advanced automated driving systems.”

Photon budget
Unlike many of the dozens of companies working on lidar equipment for self-driving vehicles, Luminar is pursuing a high-fidelity approach based around a longer-wavelength (1550 nm) laser emitter whose more eye-safe nature effectively increases the “photon budget” of the overall system, enabling long-range performance and producing a very detailed map of a car’s environment.

Set up by the young tech entrepreneur Austin Russell, Luminar emerged from nearly five years in stealth mode earlier this year, after raking in series A venture funding of $36 million. It followed that up with an appearance at the LASER World of Photonics event in Munich, where Russell and CTO Jason Eichenholz demonstrated the lidar capability on board a (human-driven) Mercedes van.

Luminar says it has now scaled up its partnerships with a select few companies - TRI being the first to deeply integrate the new sensing platform, and the first of four Luminar partners to confirm that it is working with the startup.

“We’re proud to enable the most advanced and rapidly evolving autonomous vehicle programs,” said Russell, Luminar’s CEO. “As the group defining the future of vehicle autonomy for the largest auto manufacturer in the world, TRI has the greatest opportunity to lead the charge in deploying life-saving self-driving technology at scale. 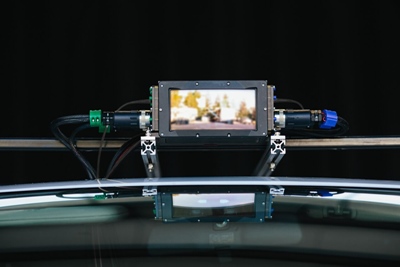 Platform 2.1: denser point cloud
Described by TRI as its “Platform 2.1” technology, the latest iteration of Toyota’s self-driving development is being shown off for the first time this week, on a closed course in Plano, Texas.

“This new lidar provides a longer sensing range, a much denser point cloud to better detect positions of three-dimensional objects, and a field of view that is the first to be dynamically configurable, which means that measurement points can be concentrated where sensing is needed most,” says TRI.

The new lidar has been married to an existing sensing system for 360-degree coverage, while TRI adds that it expects to source additional suppliers as more disruptive technology becomes available in the future.

TRI describes the new platform as a research tool for concurrent testing of its two distinct approaches to vehicle autonomy – known as “Guardian” and “Chauffeur” respectively.

Although they use the same sensor and camera technology, under Guardian the human driver maintains vehicle control while the automated driving system operates in parallel, monitoring for potential crash situations and intervening to protect vehicle occupants when needed.

Chauffeur is Toyota’s version of higher-level autonomy, where all vehicle occupants are passengers. This week’s road test, which marks the first time that the Guardian system has been demonstrated publicly, includes multiple test scenarios to demonstrate TRI’s advances in both applications.

They include an ability to detect distracted or drowsy driving in certain circumstances, and to take action if the driver does not react to turns in the road. “In such a situation, the system first warns and then will intervene with braking and steering to safely follow the road’s curvature,” TRI explains.

Range and resolution
In the Chauffeur test scenarios, TRI is demonstrating the vehicle’s ability to drive itself on a closed course, navigate around road obstacles, and make a safe lane change around an impediment in its path with another vehicle travelling at the same speed in the lane next to it.

One of the key claims of the Luminar system is that it improves resolution by more than an order of magnitude, compared with current sensors, as well as the ability to see low-reflectivity objects such as tires from more than 200 meters – regarded as a critical stand-off distance for fast-moving vehicles.

“The sensor is also the first to allow resolution to be concentrated where it’s needed most, in real time, enabling the car to clearly see and recognize cars, people, and objects, even at distance,” states the firm.

Rather than use off-the-shelf components, the Luminar team has taken a “bottom-up” approach, customizing all the major components in its system, including lasers, receivers, scanning mechanisms and processing electronics.

“The radical architecture requires only a single laser, single receiver, and ultrafast scanner to collect millions of points of information in the environment from just a fraction of the components used in today’s lidar systems,” says the company.