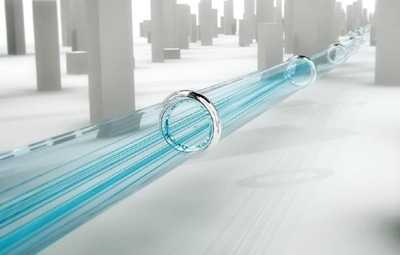 Researchers at Toshiba’s European laboratories in Cambridge, UK, claim to have increased the speed of quantum key distribution (QKD) – the “uncrackable” encryption technique based on single-photon communications – by nearly an order of magnitude.

The Japanese industrial giant states that the new record speed of 13.7 Mb/s beats the previous best of 1.9 Mb/s, thanks in part to faster detectors and electronics, as well as hardware-embedded signal processing that overcomes the current software bottleneck.

More details are expected when the company’s representatives discuss the advance at this week’s “QCrypt 2017” conference, taking place at the University of Cambridge.

Commercialization step
Osamu Hori, the director of Toshiba’s corporate research and development center, said in a company release: “Our latest achievement is a big step towards commercialization of quantum cryptography.”

Cambridge-based Toshiba Research Europe is an acknowledged leader in the field of QKD, and its team has been working on the technique since 2003. In 2010 they were the first to advance QKD to a bit rate exceeding 1 Mb/s. Since then Toshiba has demonstrated the practicality of the technology in several field trials in the UK and Japan.

According to the QCrypt 2017 program, the Toshiba Research Europe team will be presenting details of their advance September 21. But the parent company explains that they realized the record-setting QKD speed in part by developing high-speed photodetectors and electronics for registering the optical signals.

New and faster methods for post-processing of the photon signals into an encrypted key is also crucial. “The new methods include realization of the error correction and privacy amplification steps in hardware, which greatly improves the post-processing speed and overcomes the bottleneck in current software implementations,” says the firm.

Satellite links
Although QKD is a relatively established approach to secure communication, it has not yet been deployed widely – partly because of its cost and complexity, but also because the use of single photons limits the transmission reach possible with the technique.

Toshiba points out that the optical fiber losses in the latest achievement correspond to a distance of 10 kilometers, and says that it sees a commercial future in the finance, healthcare and social infrastructure sectors.

Other applications look possible, with teams from the University of Science and Technology of China (USTC) in Hefei, and the University of Waterloo in Canada both working on quantum-encrypted satellite links, and groups in Japan, Italy and Singapore believed to have similar plans.

Chengzhi Peng from the USTC team is set to present an invited talk on satellite-based QKD at this week’s QCrypt 2017 conference, while Andrew Lord, the head of optical research at BT Labs, will give a talk entitled “What is BT doing with QKD?” during a dedicated industry session.