Orion visual prosthesis to be used in human trials

FDA approval for Second Sight system will allow testing of its ability to assist blind individuals. 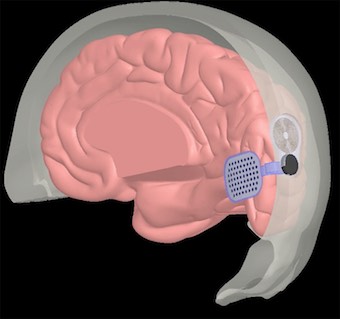 Second Sight, the California-based developer of visual prosthetics and retinal implants, will soon begin a feasibility clinical study to assess its Orion cortical visual prosthesis system in human patients, after receiving conditional approval from the US FDA.

The terms of the approval allow two US sites, at the University of California at Los Angeles (UCLA) and Baylor College of Medicine in Houston, to enroll up to five patients in total.

"This is an exciting milestone for the company, given the potential of Orion to provide useful vision to millions of blind individuals worldwide who have no other option today," said Will McGuire of Second Sight after the new FDA approval.

"The Orion team has met all major internal milestones this year and we remain on-track to achieve the company's stated goal of implanting our first Orion patient before year end."

Orion is intended to assist patients who experience profound visual impairment or who are completely blind. It is implanted into the surface of the brain near the visual cortex, which it stimulates directly with signals received from a wearable video camera and processed by a portable computer unit.

This architecture bypasses the retina and the optic nerve altogether, in an analogous fashion to the principle behind cochlear implants as a treatment for deafness.

The approval follows Second Sight's first successful implantation and activation of a visual cortical stimulator in a human subject in October 2016, the initial proof-of-concept for development of the Orion system. In that UCLA study, a 30-year-old patient was implanted with a wireless multichannel neurostimulation system, and was able to perceive and localize individual phosphenes or spots of light with no significant adverse side effects.

Groundbreaking technology
"The ability to implant the first Orion system, which has the potential to treat nearly all forms of profound blindness, has been a stated goal of the company since our IPO," commented McGuire, referring to Second Sight's initial raising of $32 million in November 2014. "This milestone is a testament to the careful, high-quality work completed by the Second Sight and UCLA teams to date."

Orion represents a significant step for Second Sight beyond its existing development of the Argus II retinal implant, intended for the treatment of Retinitis Pigmentosa and age-related macular degeneration, although the company has said that the new platform requires only relatively minor modifications from the existing product.

The Argus II is an epiretinal implant, placed in the inner surface of the retina from where it directly stimulates the innermost ganglion cells and bypasses the retina's other layers. This avoids use of the damaged photoreceptors, instead utilizing the still-healthy ganglions which transmit the visual information along the optic nerve.

Second Sight released its financial results for the second quarter of 2017 in early August 2017, shortly before the FDA announcement. It saw net sales rise to $2.2 million compared to $1.0 million for Q2 2016. Net loss for the quarter was $6.8 million, compared to a net loss of $8.5 million in the prior year quarter.

"We remain on track with our Orion project," said McGuire. "This groundbreaking technology holds the potential to restore useful vision to millions of patients worldwide who are blinded by nearly all currently untreatable causes."