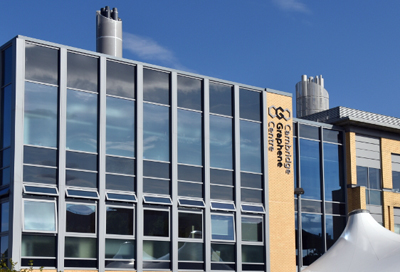 Cambridge Graphene Centre, at the University of Cambridge.

A breakthrough technique for inkjet printing, which could enable high-volume manufacturing of next-generation laser and optoelectronic technologies, has been achieved by scientists at Cambridge, UK.

The research, led by Dr Tawfique Hasan, of Cambridge Graphene Centre, at the University of Cambridge, found that black phosphorous (BP) ink – a two-dimensional material similar to graphene – is compatible with conventional inkjet printing techniques, making possible for the first time the scalable mass manufacture of BP-based laser and optoelectronic devices.

An interdisciplinary team of scientists from Cambridge, Imperial College London, Aalto University, Beihang University, and Zhejiang University, together optimized the chemical composition of BP to form a stable ink, through the balance of complex and competing fluidic effects. This has enabled the production of new functional laser and optoelectronic devices using high-speed printing.

Due to the BP ink drying rapidly, the final print quality of the devices made – a laser and a photodetector – is of a high quality and uniformity, and as good as would be expected from the printing of a photograph onto paper, say the team.

The work has just been published in Nature Communciatiopns. The research was funded by the UK’s Royal Academy of Engineering and the Engineering and Physical Sciences Research Council.

Black phosphorus has useful properties for electronic and optoelectronic devices, including a semiconductor band gap that can cover the visible and near-infrared region of the electromagnetic spectrum.

“The formulation represents a significant technical achievement in terms of using this BP material for future applications. The functional ink, containing very small flakes of BP, allows us to print onto a variety of substrates, including plastic, which remains stable for a prolonged period." 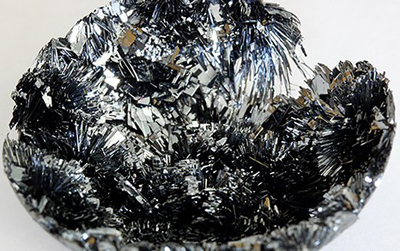 Prof Meng Zhang from Beihang University led the work on printing BP-based non-linear optical devices, which can be inserted easily into lasers to act as ultra-quick optical shutters. A continuous beam of laser radiation is converted into a repetitive series of very short pulses, which can be applied to industrial and medical applications, for example, machining, drilling, imaging and sensing.

"Our non-linear optical device design using BP achieves a significantly better performance and operational stability than any other previous demonstration, which is why our ink recipe using BP marks a significant step change towards new photonic devices and architectures using such a novel material," said Professor Zhang.

As part of the research, the team also demonstrated the ability of BP to act as an efficient and highly-responsive detector of light, extending the wavelength range beyond what is currently achieved by conventional silicon-based photodetectors.

Yet despite its remarkable performance in the lab, practical real-world exploitation of this graphene-like crystal has been limited by complex material fabrication and its poor environmental stability. But our breakthrough in BP ink is set to change all this and the ink itself can be seamlessly integrated with existing complimentary metal-oxide-semiconductor (CMOS) technologies."