University of Amsterdam technique could image nerves in real-time during clinical procedures. 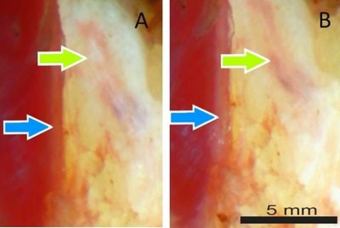 Inadvertent damage to nerves during surgical interventions is an unwelcome complication for clinicians and patients, arising partly because of the the difficulty in distinguishing between nerves and different connective tissues when they are in close proximity.

One particular area of the body where trouble can arise is the hand and wrist, where the dense networks of both sensory and motor nerves increases the chance of subsequent impairment to the hand's normal function after surgery.

A technique recently developed by the Academic Medical Center (AMC), University of Amsterdam, could offer surgeons a clearer view of the nerves in the area of interest, and a validation study to help assess its possible impact has now been published in Biomedical Optics Express.

The methods currently available to clinicians for monitoring nerve integrity usually involve either invasive electrophysiological techniques during the surgery itself, or previsualization before the procedure using MRI and sonography. Neither approach is ideal for accurately seeing what happens in real-time.

The AMC method employs collimated polarized light imaging (CPLi), and exploits the way in which nerve tissue's anisotropic structure induces a rotated linear polarized optical reflection under illumination. According to the published paper, this nerve-specific and polarized reflected light can be clearly distinguished from the isotropic and anisotropic scattering events typically observed in the surrounding tissue types.

AMC's prototype instrumental platform applies this principle by using a modified stereo microscope in which two polarizers, perpendicular to each other, can begin continuous rotation once the area of interest is in sight. Turning the rotation of the polarizers on and off effectively causes reflection from the nerves to appear and disappear in sync, aiding easy visual identification. The light is also collimated, to maximize the amount reflected by the tissue, and no further image processing was needed to allow identification of the nerves, according to the team.

"We have shown that nerves can be distinguished in human tissue by detecting the interaction of light with the structure of nerves without the need for fluorescent markers or physical interaction," said AMC's Kenneth Chin.

Confidence during surgical procedures
The new validation study applied the CPLi technique to samples of pig tissue, to confirm that the freezing and defrosting operations involved in sample preparation did not interfere with effective nerve imaging, and then to tissue from a defrosted, fresh frozen human cadaver arm.

In a direct comparison exercise, a surgeon using CPLi technology was able to correctly identify nerves in 13 different sites in the human hand 100 percent of the time, according to the paper, as compared to an accuracy rate of 77 percent for a surgeon who identified nerves using only a visual inspection.

Some preliminary in vivo observations were also made on one patient during a surgical intervention at the wrist's carpometacarpal joint for treatment of chronic pain. The anisotropic optical signature of nerves was visible in this case too when CPLi was employed, confirming the technique's potential.

Further work will now see CPLi applied to a larger patient cohort, along with an enlargement to the field of view possible with the technique. CPLi can already image an area measured in square centimeters, but a higher FoV will further expand its clinical applicability.

"This technique could improve the effectiveness of surgical interventions by helping the surgeon identify nerves in the operative field," commented project leader Thomas van Gulik. "This leads to surgeons being more confident in their surgical procedure, which will lead to less accidental injury and more targeted surgical interventions."