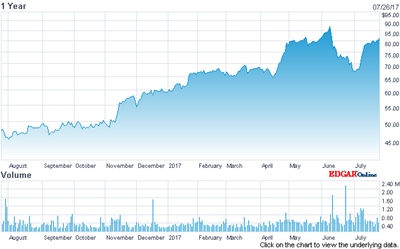 MKS Instruments, the Massachusetts company that last year acquired Newport Corporation and with it several major photonics industry brands, says that the integration process is running ahead of expectations.

With “synergies” (i.e. cost savings) better than anticipated and an ongoing uptick in spending on capital equipment across the semiconductor industry, what is now referred to as MKS’ “light and motion” business unit delivered record sales and a boost in profitability to the wider company in its latest quarter.

For the three months ending June 30, the division posted sales of $171 million, up 11 per cent on the same period in 2016 – shortly after MKS completed the $980 million acquisition.

That helped boost MKS’ total sales for the latest quarter to $482 million, up 10 per cent sequentially and a remarkable 34 per cent year-on-year. Net income of $120 million was nearly double the year-ago figure, enabling MKS to pay down more of the $800 million term loan it used to acquire Newport and negotiate a better deal with its lenders.

Semicon equipment momentum
CEO Gerald Colella told investors that the company had made “excellent progress” with the Newport business integration, already realizing $36 million of annual cost savings compared with the two standalone businesses when they were run separately. An additional $4 million round of savings is now expected.

As well as the momentum in the semiconductor market – the SEMI industry organization reports that billings among its North American members are up 50 per cent in the first half of this year – Colella noted significant gains in LED and organic LED display production, with additional boosts from applications in additive manufacturing, optical communications and life sciences.

Those markets are helping to diversify MKS’ wider business, and reduce the firm’s reliance on the twists and turns of the semiconductor industry.

“Our focus on integrating the Newport Corporation acquisition into our organization has produced both excellent results and new growth opportunities,” the CEO told an investor conference call. “We achieved our initial cost synergies ahead of plan, while also substantially improving the revenue growth profile and profitability of the light and motion division.”

Colleague and CFO Seth Bagshaw pointed out that MKS was net-cash-positive as of June 30, and had just completed an additional $50 million unscheduled repayment of its term loan, bringing cumulative “pre-payments” to $250 million.

MKS now has $523 million in term-loan debts on its balance sheet, against cash and other liquid assets of $577 million. It was also able to pay out a shareholder dividend of $9.5 million during the just-completed quarter.

Boom cycle
Although now significantly more diverse thanks to the Newport deal, MKS sales remain closely linked to the semiconductor equipment investment cycle. At present, that is in the midst of a boom period, fuelled by the introduction of extreme ultraviolet (EUV) lithography wafer patterning equipment, alongside the build-out of an anticipated 20 new chip fabs in China and major investment in flat-panel and organic LED display production.

Dan Tracy, the senior director of SEMI’s industry research and statistics effort, noted in the organization’s latest release of figures. “While month-to-month growth is slowing, 2017 will be a remarkable growth year for the semiconductor capital equipment industry.” 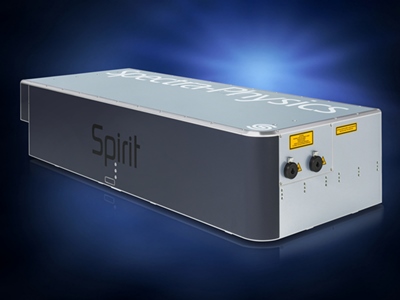 MKS’ CEO Colella said that he saw the current situation in China as similar to that in Korea a few years ago, when major investment in chip production and OLED development created the huge market for equipment now evident there.

Other growing application areas include deposition and etching tools, and back-end packaging equipment, while a cross-disciplinary team within MKS said to have solved a key problem with lens sub-assembly yields in their recent development of a system combining photonics and vacuum technologies.

Investors seem to have responded to the integration process positively, sending MKS’ stock price up some 73 per cent over the past 12 months. Trading up slightly at $82, close to a record high, on the Nasdaq exchange shortly after the latest conference call, MKS commanded a market capitalization of $4.42 billion.