Quarterly revenues and earnings up but stock price slips back as new CEO Jim Cannon takes the helm. 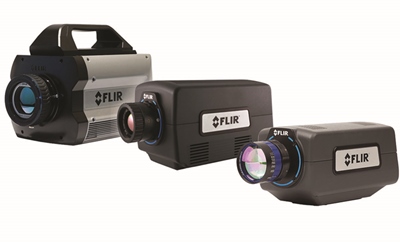 New FLIR Systems CEO Jim Cannon has announced an 8 per cent year-on-year rise in sales for the US-headquartered thermal imaging and surveillance equipment company, with 2016 acquisition Point Grey Research contributing to the uptick.

Cannon, who replaced the retiring Andy Teich a month ago, told investors that second-quarter sales of $434 million translated to net income of $51.4 million on the Oregon firm’s bottom line, up slightly on last year.

Point Grey - now known as FLIR Integrated Imaging Solutions - specializes in high-performance cameras for scientific and industrial applications, and diversifies the FLIR portfolio in the visible range of the spectrum, while its presence in the machine vision sector should provide FLIR’s infrared technology with an opening in a fast-growing application area.

Since the late-2016 deal, valued at $253 million, Point Grey has become part of FLIR’s “OEM and emerging markets” business unit. The division posted a 54 per cent year-on-year increase in sales (to $87.4 million) in the latest quarter, a boost attributed largely to the Point Grey acquisition.

“Our growth was broad across many of our businesses and geographical regions,” noted Cannon. “Strong bookings during the quarter increased backlog significantly over the previous quarter, providing us with momentum into the second half of the year.”

Evolution not revolution
Addressing a FLIR investor conference call for the first time, the new CEO said he was looking to execute a “disciplined capital deployment philosophy” to create sustainable shareholder value.

Cannon also told investors he was “excited and humbled” to serve as the FLIR CEO, noting that he had first-hand experience of the company’s technology as a soldier, manufacturer and security system integrator, and describing the purpose of FLIR as “innovating the world’s sixth sense to save lives and livelihoods”.

He indicated that FLIR would be in acquisitive mode under his watch, with a list of target businesses being drawn up in areas where he believes the company requires greater scale to be competitive.

But Cannon added that FLIR’s business was a complex one, with some very different segments, technologies and end-users being served, saying that some areas required a greater focus in the future rather than more expansion. Overall, though, employees and shareholders can expect “evolution, not revolution”.

In the latest quarter sales attributed to FLIR’s security business division took a sharp dip, with the decline ascribed to retailers delaying orders for $4.5 million worth of Lorex products. However, the unit is expected to return to normal sales growth rates in the rest of 2017, with retailers now accepting those delayed orders.

Sales momentum also dropped sharply within the company’s detection division, which relates closely to US government defense spending that can be difficult to predict and “lumpy” in terms of the timing of orders.

Asked about his expectations of US Department of Defense (DoD) spending more widely, Cannon said he was bullish about future budgets, which he expected to rise close to “wartime highs”.

New FLIR ONE kit
Among more specific recent developments, FLIR’s executive team highlighted that it recently began shipments of the third generation of FLIR ONE accessories that are used in conjunction with smart phones to create portable thermal imaging capability.

Those are now available via the FLIR web site, while another new product being offered for the maritime sector is a multi-sensor thermal imager to help captains navigate tight waterways. Featuring a cooled 640x512 pixel thermal camera and a high-definition visible camera, the M500 also offers 14x optical zoom.

Overall, Cannon described the latest quarter as “sound”, but refused to be drawn on any major strategic or restructuring moves when questioned by investors – noting that he had only been in the job for five weeks, and was busy visiting FLIR’s major sites to familiarize himself with a business that is much more diverse than the perceived focus on thermal imaging.

The company’s full-year outlook for sales and earnings remains unchanged, with revenues expected to come in at around $1.8 billion – a figure that would represent a rise from $1.66 billion last year.

But despite that, a strong order backlog, and generally improving financial indicators, FLIR’s stock price slipped back 3 per cent in early trading following the earnings release – with investors perhaps mindful of the potential disruption caused by both a new CEO and CFO at the company.