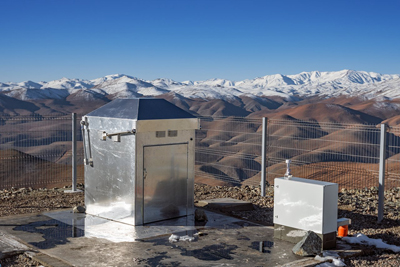 The MASCARA (Multi-site All-Sky CAmeRA) station at ESO’s La Silla Observatory in Chile has achieved first light. This new facility has the purpose of seeking out transiting exoplanets as they pass in front of their bright parent stars and create a catalogue of targets for future exoplanet characterisation observations.

In June 2016, ESO reached an agreement with Leiden University to site a station of MASCARA at ESO’s La Silla Observatory in Chile, taking advantage of the excellent observing conditions of the southern hemisphere skies. This station has just reported its first successful test observations.

The MASCARA station in Chile is the second worldwide to begin such operations; the first station is in the northern hemisphere on the Roque de los Muchachos Observatory, on the island of La Palma in the Canary Islands. Each station contains a battery of cameras in a temperature-controlled enclosure, which monitor almost the entire sky visible from its location.

“Stations are needed in both the northern and southern hemisphere to obtain all-sky coverage,” said Ignas Snellen, of Leiden University and the MASCARA project lead. “With the second station at La Silla now in place, we can monitor almost all the brighter stars in the entire sky.”

Built by Leiden University in the Netherlands, MASCARA is a planet-hunting instrument. Consisting of five digital cameras with off-the-shelf components, this small planet-hunter takes repeated measurements of the brightnesses of thousands of stars and uses software to hunt for the slight dimming of a star’s light as a planet crosses the face of the star.

This exoplanet discovery method is called transit photometry. The planet’s size and orbit can be directly determined through this method, and in very bright systems the planet's atmosphere can also be characterised by further observations with large telescopes such as ESO’s Very Large Telescope.

The main purpose of MASCARA is to find exoplanets around the brightest stars in the sky, currently not probed either by space or ground-based surveys. The target population for MASCARA consists mostly of “hot Jupiters” — large worlds that are physically similar to Jupiter but orbit very close to their parent star, resulting in high surface temperatures and orbital periods of only a few hours. Dozens of hot Jupiters have been discovered with the radial velocity exoplanet detection method, as they exert a noticeably gravitational influence on their host stars.

“Not much can yet be learned from the planets discovered via the radial velocity method, as they require significantly better direct imaging techniques to separate the light of these cool, old planets from that of their host stars,” said Snellen. “In contrast, planets that transit their host stars can readily be characterised.”

MASCARA also has the potential to discover super-Earths and Neptune-sized planets. The project is expected to provide a catalogue of the brightest nearby targets for future exoplanet characterisation observations, particularly for detailed planetary atmosphere observations.

MASCARA can monitor stars down to about magnitude 8.4 — roughly ten times fainter than can be seen with the naked eye on a clear dark night. Due to its design, MASCARA is less sensitive to weather condition than other observing instruments, and so observations may be made even when the sky is partially cloudy, thus extending observation times.