The UK’s Knowledge Transfer Network (KTN) has just opened registration for a £6 million funding round aimed at supporting the commercialization of new quantum technologies.

Part of the wider National Quantum Technology Programme (NQTP), into which UK funding authorities are pouring £270 million over five years, the latest round is unusual in that it is offering financial support for both technical and non-technical projects.

Hot topic
Quantum has emerged as a hot research topic on the photonics landscape over the past couple of years, and was the subject of much discussion at the recent LASER World of Photonics conference and trade show in Munich, Germany.

Efforts to harness quantum effects such as entanglement and superposition in applications like gravity and magnetism sensors, encrypted communications, and - eventually - computing have attracted huge interest, spurred in part by security fears prompted by efforts in China to develop space-based quantum links.

As recently as last week, Chinese scientists reported quantum state teleportation from Earth to an orbiting satellite. In the UK, the £270 million funding set aside for what is hoped to be only the first five years of the NQTP was motivated initially by the government-owned and top-secret Defence Science and Technology Laboratory (DSTL).

In its latest quantum funding round, the KTN says that successful technical projects will be those looking to establish the feasibility of devices exploiting entanglement and superposition effects, although there will also be support for key component technologies that will be needed in future quantum systems, including stabilized lasers and single-photon sources and detectors.

Opportunities in the non-technical realm range from so-called “roadmapping” activities scoping out potential future developments, alongside studies of future markets, applications and business models as quantum technologies are adopted.

The KTN’s explanatory note suggests that projects involving knowledge exchange, learning and understanding of quantum technologies and potential applications, and the capture of user, performance or testing specifications are all suitable for funding.

Learn about our work in quantum research including the UK's 1st commercial atom interferometer. 3pm B3.121 #Laser17 pic.twitter.com/vHStSRLmCg

One company to have benefited from the explosion of global interest in quantum technologies is Scotland-headquartered M-Squared Lasers.

Speaking at the LASER trade show in Munich last month, the company’s co-founder and CEO Graeme Malcolm suggested that the known requirements of quantum-based optical atomic clocks made them stand out as one of the likely initial applications of the emerging technology. M-Squared is working with the likes of the UK’s National Physical Laboratory (NPL) in that area.

Malcolm added that, after optical clocks and quantum key distribution (QKD) encrypted communication, he expected to see rapid uptake of new quantum sensor systems, where good progress is being made in terms of reliability. Part of M-Squared’s strategy is to move up the value chain within the quantum sector, to provide quantum systems as well as the stabilized laser components that it is best known for.

Examples of the second wave of applications could include gravity sensors and devices able to see “through” walls to check for pipes fabricated from hard-to-detect plastic materials. Quantum computing remains several years away from any real-world implementation – despite the best efforts of the likes of computing giants Google, Intel, and IBM, alongside Canadian upstart D-Wave Systems.

European ‘catch-up’ effort
Also speaking in Munich, Tommaso Calarco from the University of Ulm said in a conference plenary session dedicated to quantum technologies that a call for participation in Europe's new €1 billion flagship research effort on the topic, funded via the European Commission, should appear this November.

“Europe has to catch up a bit,” said Calarco, pointing to the major investment by the Chinese state in QKD networks alongside the North American computing giants’ spending and the UK’s standalone effort.

Head of the Integrated Quantum Science and Technology center hosted by Ulm and Stuttgart universities, Calarco also co-authored the “Quantum Manifesto” written last year at the invitation of EC digital economy commissioner Gunther Oettinger, and the basis for the flagship research program.

He said that there were five good reasons why Europe would be able to remain at the forefront of the sector. Those include the presence of several world-leading experts, in the form of 2012 Nobel physics laureate Serge Haroche, Rainer Blatt from the University of Innsbruck in Austria, Andreas Wallraff from ETH Zurich’s Quantum Device Lab, and Immanuel Bloch from the Max Planck Institute for Quantum Optics in Garching.

Add to that a strong supply chain, a host of new startup companies, growing industrial interest from big-hitters like Bosch, Siemens, Thales, and ASML, plus the EC’s funding, and Calarco is optimistic that Europe will be able to keep pace. 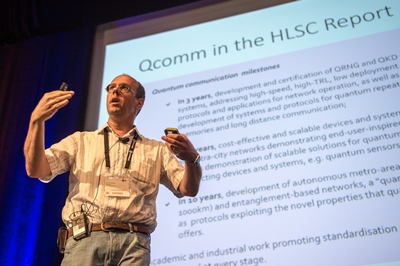 During the same plenary session Toptica Photonics CEO Wilhelm Kaenders reiterated the importance of photonics technologies that underpin much of the quantum research work, describing Toptica as a provider of “quantum enabling technology”.

“Quantum technology is not only optical, but a great deal of it is,” he told delegates at the event, adding that with at least €1.5 billion now being spent on quantum developments globally each year – and perhaps as much again invested in under-the-radar innovation – quantum is already starting to look like a genuine business sector.

“It’s not a question of ‘if’, but ‘when’ we will see our kids using quantum technologies,” he predicted.