From tooth enamel characterization to paper production quality control and examining the thickness of car paint, terahertz technology is finding its feet in commercial applications.

by Andrew Williams
Lying between the infrared and microwave spectral regions, the so-called 'terahertz gap' possesses unique properties. Light within the terahertz band of frequencies passes through many otherwise opaque objects, but is absorbed by certain molecules – meaning that it can provide useful spectroscopic and compositional information that is ordinarily hidden.

In addition, terahertz light is generally non-destructive and safe, making it an ideal inspection and imaging tool for many applications across a range of industries. The big challenge is generating terahertz photons in the first place. 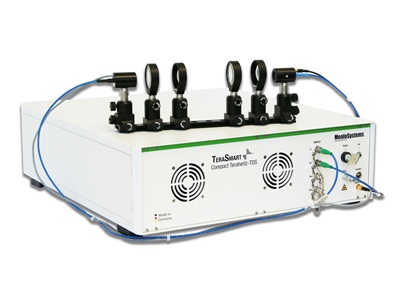 The femtosecond lasers are equipped with Menlo's proprietary 'figure 9' technology for ultra-stable and reliable laser mode-locking, an attribute that Krok says is a crucial requirement for harsh environments like those usually encountered within industrial production sites. The telecom wavelength employed also enables delivery via optical fiber to the various parts of the spectrometer, ensuring eye-safe operation.

Coating thickness metrology
Menlo’s customers have successfully implemented THz-TDS spectrometers for non-destructive testing of a variety of materials. According to Krok, one of the most in-demand applications is the measurement of layer thickness. She says that terahertz spectroscopy can determine this with the micron-level accuracy, in multi-layered systems and with either very thick or very thin layers.

“For example, paper product manufacturers are seeking to measure the thickness of coating layers in order to ensure the highest quality at the lowest consumption of coating materials,” Krok told optics.org. “But of course the application is not limited to paper, since in principle any type of coating layer which is transparent for terahertz radiation can be characterized. The automotive industry is also interested in the uniform distribution of coatings.

“Equally, thick layers such as the walls of pipes need quality control during fabrication for longevity, and [we have] provided a solution which has significant advantages over the established characterization method using ultrasound propagation.”

In general, adds Krok, plastics and plastic composite materials are best suited to terahertz investigation because of their transparency in that part of the spectrum. Terahertz spectroscopy and imaging systems can easily characterize the composition of compounds like plastics, wood and glass fiber, and can be used to map the “fill-factor”, orientation and even the humidity of the fibers.

“Also, optically invisible defects such as air inserts, contamination or delamination of adhesive bonds are revealed,” points out Krok. “The in-line measurement of additive concentration in rubber [also] proved to be a reliable tool for the adjustment of the hardness of the end product.”

Although she admits that terahertz spectral imaging is still a more time-consuming method than some others, she reveals that the technique has already been used to screen envelopes for the detection of concealed and potentially hazardous materials including drugs and explosives - and Krok believes it could also be applied in other areas like pharmaceutical quality control.

Fault analysis
Also in Germany, a Fraunhofer HHI research group is currently working on several industry-relevant themes, recently demonstrating what it describes as 'attractive applications' in fields from security and medicine to biology and non-destructive materials testing. Elsewhere, San Jose outfit TeraSense has developed terahertz technology for the automotive, ceramic and security industries - amongst others. 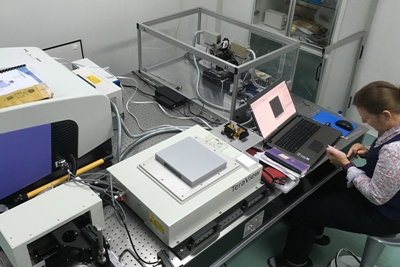 Another pioneering company is Cambridge-based TeraView, a spin-out from Toshiba and Cambridge University. It focuses on the application of its proprietary terahertz technology across a number of markets, including fault analysis and quality assurance for semiconductor chips used in mobile computing and communications, as well as non-destructive inspection of high-value coatings used in the automotive, pharmaceutical, food and solar industries.

The company's core TeraPulse 4000 instrument uses a pulsed mode-locked fiber laser to generate ultrashort terahertz pulses. These are typically in the 0.06-4.5 THz region, although there are options to extend the range up to 6 THz.

Seed kernels to tooth enamel
As Taday explains, the instrument can also be used to image seed kernels, semiconductors, composites, plastics, paints, skin and even tooth enamel. Terahertz light is generated by firing ultrashort pulses of laser light at a photoconductive antenna, generating electron-hole pairs in the GaAs substrate.

These photo-injected charge carriers are then accelerated through the substrate by a voltage applied across two electrodes - with movement of the electric field delivering a pulse of terahertz radiation.

“The detection of terahertz radiation is essentially the reverse of emission,” Taday explains. “When a returning terahertz pulse is incident on the detector at the same time as an incident laser pulse, generated electron-holes are accelerated via the terahertz radiation to an electrode and this is measured as a current.

“This means that the detector is essentially gated and only 'turned on' at precise periods of time due to the laser pulse. The coherent nature of the radiation and the precise timing of the detection scheme allow the direct measurement of the terahertz electric field.”

The company is currently applying the technology in a number of key commercial areas, including as a paint thickness sensor for the automotive industry, a fault sensor in semiconductor manufacturing, and to penetrate non-conducting materials in the pharmaceutical industry.

"We continue to work with the academic community, with global sales in some 30 countries,” he adds. “We are also working with a number of blue-chip companies to expand [our] applications.”

As BATOP’s founder Wolfgang Richter explains, the company's customers mainly use terahertz spectrometers for research projects to discover which practical applications will be possible. So far, those applications span a wide field - ranging from basic research on low-dimensional semiconductor materials and plasmonic structures to the more utilitarian measurement of plastic, paper, and wood in production.

“Because of the strong absorption of terahertz waves in water, the water content of many materials including plants and leaves are also of interest," says Richter. “There are also research projects to analyze old paintings, [although] the use of terahertz spectrometers for in situ production quality control is still at an early stage and needs some time to establish [itself].”

Looking ahead, Richter sees terahertz spectrometers requiring a number of vital attributes to become useful for production control, including a large signal-to-noise ratio, a wide bandwidth, and a compact and rigid design, as well as long-term stability and lower cost.

He said: “The fast development of durable short-pulse lasers is the main base to fulfil these requirements now. Additionally the antennas can be further improved.”

Over the next few years, Richter also anticipates the introduction of successive terahertz spectrometers in production plants for a wide range of applications, where the technology will replace X-ray tools to measure material thickness and density. Key examples will include paper and plastics production, alongside quality control of thicker dielectric materials, where internal voids and moisture can be detected.