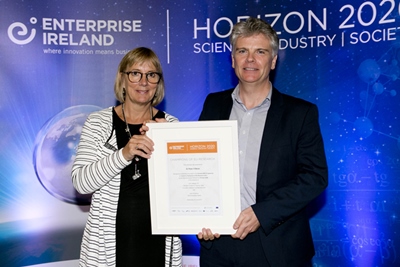 Peter O'Brien, the deputy director of the Irish Photonic Integration Centre (IPIC), is one of 16 scientists in Ireland to be recognized as a “champion of EU research”.

The award for outstanding achievement under the Horizon 2020 innovation program relates to the establishment of the pilot production line for assembly and packaging of integrated photonics devices at the Cork institution – under the dedicated “PIXAPP” program funded via the Photonics21 public-private partnership (PPP).

Interdisciplinary team
O’Brien is one of three winners in the “collaborative research” category, with the award reflecting the participation of no fewer than 18 partners in the €15.5 million PIXAPP project. It enjoys a European Union contribution of €13.4 million and runs through the end of 2020.

The interdisciplinary team includes some leading industrial and research organisations, including the CEA and III-V laboratories in France, IMEC in Belgium, and Ireland’s own Eblana Photonics.

Similar to elements of the AIM Photonics initiative in the US, the intention is to provide Europe’s SMEs with a “one-stop shop” to access highly integrated photonics devices that would otherwise be too expensive and complex to source for many, enabling them to exploit recent breakthroughs in photonics integrated circuit (PIC) technologies for communication, security and healthcare applications.

Earlier this year O’Brien told the Photonics21 annual meeting that PIXAPP would “establish best-in-class PIC packaging technologies that are cost-effective and scalable to high-volume manufacture”.

Another key element that echoes the larger AIM Photonics effort is training and education, with the Tyndall site set to host what O’Brien called a “game-changing and unique laboratory-based training program”.

The focus on packaging is seen as crucial because this is perceived to be a significant bottleneck in the existing supply chain for PICs. ”Within the European infrastructure, we have very good institutes and companies developing new capabilities,” he said in Brussels at the March meeting. “But there has been a real difficulty in scaling that up to high volume and we believe that is where there’s an enormous opportunity.” 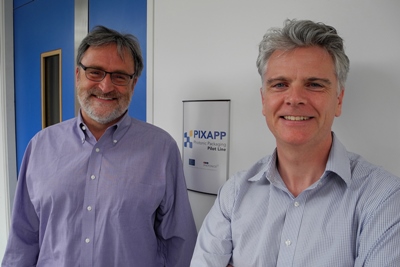 AIM Photonics connection
Connections with AIM Photonics were reinforced last week when the US effort’s CEO Michael Liehr paid a visit to Tyndall to meet with O’Brien.

According to the Cork institution, Liehr was given a detailed overview of the advanced packaging technologies available within the PIXAPP pilot line, while opportunities for collaboration, including training elements and and the development of technology roadmaps for integrated photonics were all discussed.

The New York-headquartered AIM consortium features some of the most prestigious US academic institutions involved in photonics, including the Massachusetts Institute of Technology, University of Arizona, Columbia University, the University of California Santa Barbara, and the State University of New York’s Polytechnic Institute.