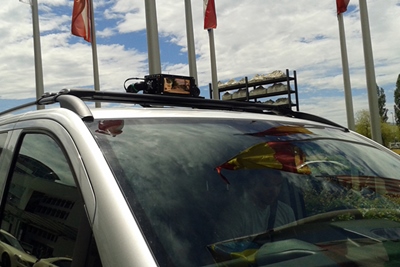 Lidar on board: Luminar technology on a Mercedes Metris

by Mike Hatcher in Munich
Only eagle-eyed delegates may have noticed, but one of the hot topics under discussion inside LASER World of Photonics this week also made an appearance outside in the streets around the Messe.

A lidar-enabled Mercedes Benz Metris was kitted out with a state-of-the-art sensor from the venture-backed US start-up Luminar Technologies, meaning that the company’s CEO and co-founder Austin Russell and CTO Jason Eichenholz could demonstrate their technology in action while meeting up with key partners and suppliers at the trade show.

High-specification laser
Based around individual, but customized, high-specification 1550 nm lasers and hybrid InGaAs photodetectors providing 64-channel sensing, the Luminar system is intended to deliver levels of range and resolution far beyond similar lidar sensors from rival producers that are typically built from off-the-shelf lasers and photodetectors operating at shorter wavelengths. The eye-safe nature of the longer wavelength means that 40 times more power can be deployed, with the additional "photon budget" translating to superior range and resolution.

The flip side of that is the higher cost of the Luminar approach, but Russell and Eichenholz characterize most of the increasingly crowded vehicle lidar sector as being engaged in a “race to the bottom” on price and performance rather than delivering a technology that actually works to the specification required by the auto industry.

Russell says that rival systems will suffer critical failures – for example failing to spot another road user or obstruction – every 100 miles or so, when what's required is a failure rate of once every million miles of autonomous driving.

“The failure of resolution and range is really a data quality problem,” said Russell, the fresh-faced 22-year-old whose Silicon Valley tech-star stylings are in stark contrast to the vast majority of the PhD-laden photonics executives gathering in Munich this week.

While it sports a Luminar lidar system, the Mercedes Benz touring the streets outside the Messe is not an autonomous vehicle – it’s here to show off the superior resolution and range of the approach versus rival technologies while being driven by a conventional human being.

Lidar on board
optics.org was treated to a ride: inside the vehicle, the lidar data certainly looks impressive, with what initially seem like 64 abstract lines of data generated by a single laser at ten frames per second swiftly turning into recognizable shapes of both stationary and moving objects, color-coded according to range. 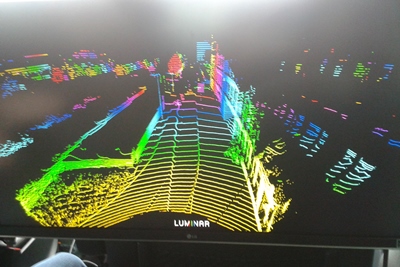 When a truck turns across the road some 200 meters ahead, its shape and motion is picked up clearly, appearing in red behind other vehicles, pedestrians, traffic lights and trees.

Russell and Eichenholz stress the ability of the Luminar system to spot low-reflectivity objects at the 200 meter range deemed necessary by car makers for safe autonomous driving. “It’s the first system to get the range and resolution needed by the automotive industry,” says Russell.

While the high cost of mission-capable lidar sensors has been held up as an insurmountable problem by some, Russell sees the dynamics and business models of the auto industry changing so drastically with the advent of autonomous vehicles that the perceived problem of high cost is something of a red herring.

He believes that even if a sensor that actually works to the right specifications ends up costing tens of thousands of dollars – more than the car itself – that could be acceptable to a much-changed industry.

His thinking is that if self-driving cars do become ubiquitous, people will not be purchasing one and locking it up in the garage overnight – instead, those cars will be widely shared, perhaps hired by the hour with an Uber-like business model, and utilized far more efficiently than today’s mostly-idle vehicles.

One implication of that vehicle-sharing economy would be the dramatic impact on the significance of branding, if the priority simply becomes travelling from one place to another safely in a self-driving car. “Car companies are in an existential crisis around brand equity,” is how Russell puts it.

System ramp
That level of automation is still some way off, of course. Exactly how far off is impossible to say, and the Luminar team is not keen to speculate.

What they do say is that they’ll be ramping up production of their next-generation sensors later this year, with the first of what is expected to be a 10,000-unit run due to arrive with customers before the end of December.

Whether or not cost turns out to be a major issue remains to be seen, and there are plenty of other challenges in the meantime: from the relative bulkiness of the Luminar system, power and cooling requirements, and processing power, to protecting intellectual property in what is already a hugely competitive and increasingly crowded sector with some seriously heavyweight players.

Just two weeks ago AEye, another Silicon Valley start-up developing lidar sensors around 1550 nm lasers, said it had raised $16 million from the likes of Intel Capital and Airbus Ventures.

It will be a while before we discover who wins out in the burgeoning auto lidar space, but Luminar certainly enjoys some high-profile support in the industry right now. SPIE’s CEO Eugene Arthurs said earlier this year, when the company emerged from a five-year period in stealth mode largely spent setting up intellectual property and supply agreements:

“I have seen many lidar systems in my time, but this is a truly innovative system for its resolution, range and compactness.” And after taking a ride in the Mercedes-Benz outside Messe Munich this week, he declared himself more convinced than ever of Luminar’s credentials.