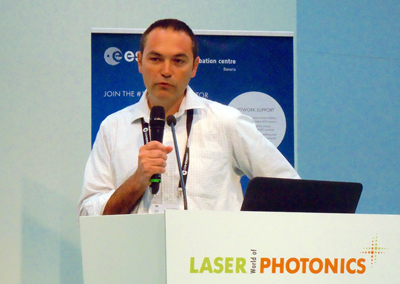 At Startup World – part of this week’s LASER World of Photonics expo in Munich – the winners of the second bi-annual competition were announced this morning, with gold, silver and bronze categories picking up €3000, €2000 and €1000 cash prizes, respectively, as well as promotional support.

Overall winner was Eran Hochstadter, Head of Business Unit at ContinUse Biometrics, a new contactless biometric scanning company, based in Tel Aviv, Israel. He told the gathering, “Continuse Biometrics is bringing to market the only integrated, remote and contactless sensing technology that both authenticates users and monitors their physiological state.”

“Our exclusive sensor performs active and continuous biometrics, scanning a distance of up to several hundred meters. The technology is especially geared for the eHealth, IoT, Mobile, and consumer goods markets.”

Produced by a team of academics, the sensor is based on nano-technology that detects molecular vibration. Unaffected by clothing or other physical conditions, it can measure over 20 bioparameters, such as heartrate, respiration rate, blood pressure, glucose levels, and alcohol levels. The company is a spinoff from a 10-year research project conducted at Bar-Ilan and Valencia Universities, now being commercialized by a team in Israel, Spain and Silicon Valley, Ca, USA.

Second prize was awarded to ATR Elements, based in Gilching, near Munich, Germany. This startup has developed an infrared spectroscopy process for blood testing, said to be much cheaper and more efficient than existing alternatives.. ATR stands for attenuated total reflection.

The team, headed by Lorenz Sykora, presenting at today's event, Alex Geißler, and Anja Müller, has developed the core crystal component necessary for IR spectroscopy. They made the carrier from low-cost, highly sensitive silicon crystal.

The awards, judged by a panel of industry experts in recent months and refined from a longlist of 20 new photonics companies, were presented here today by various representatives of industry, Messe München, and AZO, a Bavarian hub of Germany’s aerospace industry. 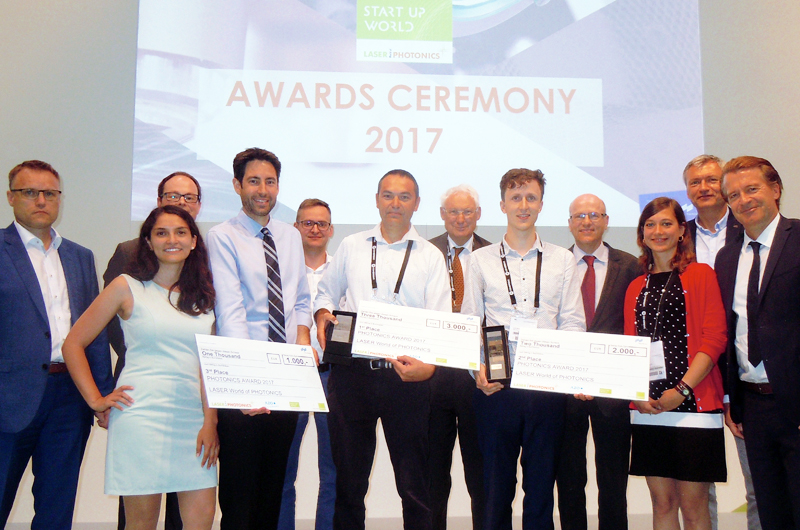 Startup 2017: The winners with judges, representatives of Messe München and sponsor company AZO.