Outstanding inventors from 12 countries took centre stage as the European Patent Office (EPO) unveiled the winners of its The European Inventor Award 2017 at a ceremony on June 15th in Venice.

EPO President Benoît Battistelli commented, “These inventors have not only contributed to furthering technological development, their patented inventions have had a major social and economic impact – from life-saving medical advances and materials to protect our environment to satellite navigation technologies that bring us closer together.” 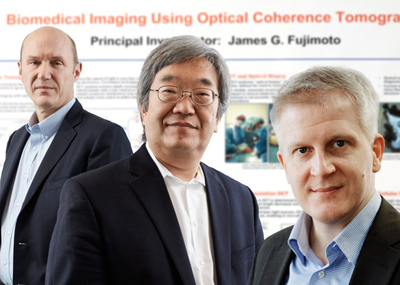 Notable winners working in the photonics-related sector were James G. Fujimoto, Eric A. Swanson and Robert Huber (USA, Germany), whose work is in the field of high-resolution medical imaging (OCT).

Their development allows doctors and clinicians to examine soft body tissue and blood vessels without invasive probing or surgical biopsies thanks to the breakthrough of optical coherence tomography – the increasingly-widely used “OCT” – technology developed by this team of two US engineers and German physicist.

Now a standard in ophthalmology, OCT technology has given doctors a new tool to diagnose serious eye diseases at early, treatable stages, preventing vision loss and serious complications in countless cases. OCT's applications have been expanded to a range of medical fields.

The principle behind OCT is similar to ultrasound. But instead of sound waves, the system uses the "echo" of light beams refracted from human tissue. The technology requires no contrast fluids or preparation of body tissue.

An OCT procedure takes a few minutes and works in three steps. A fast-pulse laser shoots near-infrared light into soft tissue about 1-2 mm deep. The scattered light from the tissue reveals anatomical features when compared to a reference beam of unscattered light. Finally, data from the light beams is processed by computer software and rendered into images with microscopic clarity.

The team’s work is described in the following video:

Instead of looking for the presence of malaria pathogens in the blood through the microscope, their technique relies on a combination of 30 blood parameters to create a “data fingerprint” that rapidly identifies malaria with almost complete certainty.

Oil and chemical spills are responsible for considerable damage to both human health and the environment. However, they may have met their match with a novel micronised wax, developed by Günter Hufschmid and his team at the German company Deurex.

Moroccan biology professor Adnane Remmal was picked by the public in an online poll to receive this year’s Popular Prize for his invention of a new tool in the global fight against drug-resistant bacteria.

Considered the father of modern-day vaccinations, Italian microbiologist Rino Rappuoli's vaccines have made the world a safer place; his techniques to manufacture them have fundamentally changed vaccine design, including a process known as “reverse vaccinology” used to create the world's first genome-derived vaccines.