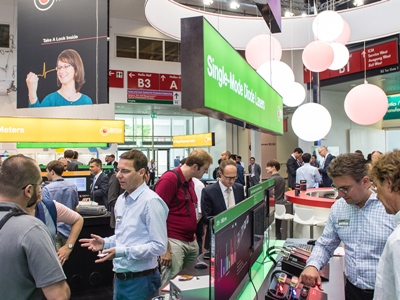 That’s according to ESI’s Haibin Zhang, who was one of several speakers covering the ultrafast topic at a dedicated – and packed - applications panel on the opening day of the LASER World of Photonics exhibition in Munich.

While several of the panel's speakers agreed that the market for such sources in industrial applications was growing rapidly, the inevitable trade-offs between machining quality, throughput speed and cost remains a key issue.

ESI, which sells a variety of laser micromachining systems based around ultrafast lasers, has taken matters into its own hands with the development of what the company calls “tertiary beam positioning.”

Zhang explained that ultrafast laser companies have typically ramped the average output power - and therefore the potential to drive throughput and reduce process cost - by increasing the pulse repetition rates of their sources, which now run into the megahertz domain.

The problem with this approach is that the rapid succession of ultrashort pulses can still end up delivering an accumulation of heat energy to a target material – the very thing that the so-called “cold ablation” of such lasers is supposed to overcome.

So to maintain ultrashort-pulse processing quality while ramping up power and throughput, the ESI development team worked up a novel approach to beam steering that relies on three different positioning and scanning elements.

Likened by Zhang to using your arm, wrist, and finger in order to paint both extremely quickly and with great finesse, the approach relies on a conventional scan lens, alongside two galvanometers and two acousto-optic deflectors.

A single laser head fitted with the technology is said to be capable of machining a remarkable 10,000 through-silicon vias (TSVs) per second.

Aside from ESI, German scanning specialist Scanlab was on hand to talk up what it describes as a "quantum leap" for 3D laser processing, in the form of its new "excelliSHIFT z-scanner."

Among the other speakers on the application panel were Roland Mayerhofer from Coherent-Rofin, who highlighted the advantages of the laser “filamentation” technique for machining brittle and difficult-to-handle materials such as tempered glass.

Filamentation works by harnessing the Kerr effect to create a “needle” in the target material, so that when it the beam and the sample are then moved in relation to each other, the target piece can be precision-cleaved, with little need for post-processing.

That cleaving step can be achieved in a number of ways, using thermal, chemical or mechanical processes, and is said to result in fewer processing steps and more versatile laser shaping capability. Mayerhofer is anticipating future application demand in automotive displays, consumer electrons, and optics – while one customer has used the approach to produce top-quality wine glasses.

In the same session, Claus Dold from the Swiss machining equipment firm EWAG – part of the industrial tool giant Körber – described how ultrafast lasers were finding applications in shaping “ultrahard” materials like diamond and silicon carbide in specialist machine tools.

A fast-growing segment within an otherwise highly mature sector, the tools with laser-shaped tips are able to reduce problems such as chipping, as well as create some remarkably precise mechanical capability.

Dold showed a slide featuring a carbide rod with a diameter of just 10 µm – approximately an order of magnitude less than the width of a human hair, and in fact close to grain size of the ultrahard material.