Memorandum of understanding with Airbus subsidiary will see optical filters distributed to commercial market next year. 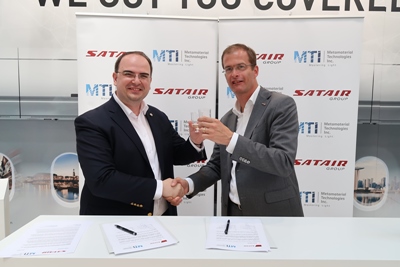 Optical filters that protect aircraft and pilots against the growing threat of laser strikes are set to hit the commercial aviation market as soon as next year, according to the Canadian company that has developed the technology.

A memorandum of understanding between Metamaterial Technology Inc. (MTI) and the Airbus subsidiary Satair is said to include an “exclusive multi-million dollar global distribution agreement” to bring MTI’s laser protection product metaAIR to civil aviation.

MTI says that metaAIR will be developed initially for Airbus A320 aircraft – one of the workhorses of civil aviation – with more Airbus and Boeing planes to follow shortly afterwards, along with other commercial airliners.

‘Milestone’ agreement
Announcing the deal at this week’s International Paris Air Show, the Nova Scotia company said: “Satair Group is now moving this relationship to commercialization and will deploy its global presence and extended distribution and parts support services to all commercial aviation market segments with a full metaAIR service offering package.”

Based on thin-film metamaterials that can be produced in large sizes using optical lithography equipment, the metaAIR filters can be applied to any transparent surface.

“The filter deflects harmful laser beams aimed at aircraft windscreens, even at high power levels and from wide angles, preventing the beam from reaching the inside of the aircraft cockpit, “says the venture-backed firm.

As well as protection from specific laser wavelengths typical of increasingly cheap and powerful laser diode pointers, metaAIR may also feature new types of optical protection – including from ultraviolet radiation experienced during the daytime at cruising altitudes.

MTI’s founder and CEO George Palikaras said: “Today marks a key milestone for MTI. Satair Group is a global leader in aerospace supply management and known for their innovative products.

“We are very pleased to have Satair as our exclusive distributor for our laser protection products. Through our partnership with Satair we will introduce metaAIR to the commercial aviation market in 2018, offering a solution to the increasing threats of laser strikes in global aviation.”

Earlier this year, the two parties signed a new agreement for the validation, certification and commercialization of metaAIR, shortly before MTI closed a series A round of venture finance worth $8.3 million.

First-mover advantage
Satair’s CEO Bart Reijnen commented: “We are delighted to pick up the baton for this exciting technology from our colleagues at Airbus Corporate Innovation and Airbus Aircraft Security who have steered it through the verification and testing stage.

“With our first-mover advantage and through our global reach and excellent relationships with operators we will ensure metaAIR gets exposure to all aircraft categories and to airlines, MROs [i.e. maintenance, repair and overhaul companies] and corporate operators worldwide.”

Initially, that will mean development with an experienced partner to ensure that metaAIR meets airworthiness and certification requirements for different aircraft types.

The filter technology has emerged in response to the proliferation of “strikes” by laser pointers on aircraft, which can both distract and harm pilots during critical phases of flight, typically at low altitudes.