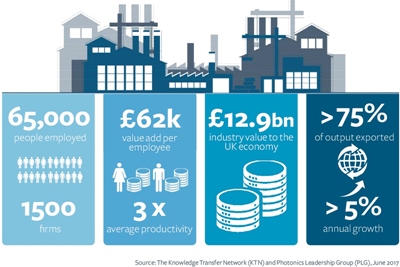 Value added: the UK photonics economy at a glance

Photonics technology produced in the UK now contributes £12.9 billion to the country’s economy annually, according to an updated analysis by the Photonics Leadership Group (PLG) and Knowledge Transfer Network (KTN).

Released during the giant LASER World of Photonics event taking place in Munich, Germany, the new figures indicate an increase of £2.4 billion since the initial PLG analysis three years ago.

That equates to an average growth rate of just over 5 per cent over four years. And although this is slower than the 8-10 per cent rate of growth anticipated in the 2013 report, the PLG points out that it means photonics is growing at twice the speed of the wider UK economy.

PLG chief executive John Lincoln told optics.org that the updated figures are the result of a more robust analysis of the UK’s photonics landscape, with a fully revised company list and expert industry input used to apportion photonics-related revenues generated by diversified companies. The figures will also be updated on an annual basis from now on.

The update also suggests that the productivity of UK photonics is significantly higher than previously thought. “The UK photonics workforce contributes £62,000 gross value add (GVA) per employee to the economy, which as a measure of productivity is almost three times the national average,” it states. That figure is up from the earlier estimate of £49,000.

Other key figures in the report confirm that some 65,000 people are employed by approximately 1500 photonics companies in the UK, similar to the 2013 report.

Germany comparison
For comparison, the latest “Photonics in Germany” industry report published by the VDMA (Germany’s Mechanical Engineering Industry Association) Photonics Forum estimated the sector to have a domestic production value of €31 billion in 2016 – although that total includes a €1.7 billion contribution from photovoltaics.

The total is up from €27 billion in 2011 and represents a compound annual growth rate of only 3 per cent, but the dramatic decline of Germany’s PV sector since then has skewed the overall picture somewhat.

“Without the negative development of photovoltaics, the average annual growth rate of German photonics production would be around 6 per cent,” points out VDMA.

The VDMA analysis anticipates future growth to average 5.7 per cent, which would result in a €39 billion domestic photonics industry by 2020. Production technology is expected to be the fastest-growing sub-sector, with the emergence of extreme ultraviolet (EUV) lithography in semiconductor processing playing a key role.

VDMA suggests that German component suppliers will “profit disproportionately” from EUV if the technology does prove to be a success, with the likes of laser provider Trumpf and optics giant Zeiss among the key players involved.

The organization’s 2015 report on the global photonics industry estimated the total sector to be worth €447 billion, and identified China as the leading geography with a 27 per cent share of the overall market – thanks largely to production of displays and photovoltaics.

Sector funding
The PLG is hoping to stimulate future growth in the UK by convincing politicians to commit to funding greater photonics development under an “enabling technology” umbrella approach.

While the recent UK election result has thrown into doubt several aspects of the current government’s plans, it is believed that the industrial strategy policy has broad cross-party support and will continue to move forward. Last November, the government pledged to make what was described at the time by scientific groups as a "truly exciting" investment in technology as a key element of the wider strategy.

Responding to the green paper detailing that industrial strategy in April, the PLG urged the government to “take the long view” to understand the impact of enabling technologies like photonics across several industrial sectors – and to be wary of only working with fixed vertical market segments.

The organization also pointed to Germany’s High-Tech Gründerfonds fund for seed-stage investment as a model to follow for successful public-private investment.

“It is a model that could be highly beneficial to the UK and may be constructed to have a regional structure thus supporting capital investments outside the London area.”