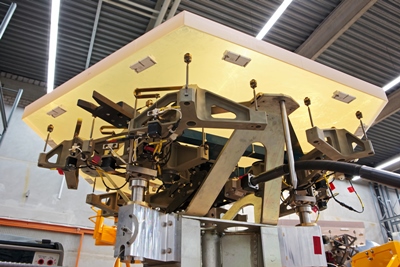 Germany-based precision positioning specialist Physik Instrumente (PI) has won a contract to provide more than 2000 actuators for the nearly 800 quarter-tonne segments that will make up the primary mirror of the European Southern Observatory’s Extremely Large Telescope (ELT).

Scheduled for “first light” in 2024, ELT’s 39 meter-diameter mirror will make it the largest optical telescope in the world, and once operational it will be powerful enough to resolve individual stars within distant galaxies.

Piston, tip and tilt control
In part, that unprecedented optical power and precision relies on an adaptive optics system featuring guide stars and large deformable mirrors to correct for the distorting effect of the Earth’s atmosphere.

But the giant primary mirror structure also requires careful control to maintain its shape in the harsh conditions at the summit of Cerro Armazones in the Atacama Desert – and that is where PI’s actuators come in.

The Karlsruhe company will construct the position actuators (PACTs) that will carefully adjust the 798 hexagonal segments that make up ELT’s primary mirror.

Each of those segments measures 1.4 meters across and weighs 250 kg, and will be mounted on three PACTs - meaning that 2394 are needed in total. The PACTs support the segment and actively control its position in three directions, known as piston, tip and tilt.

“The control system of the ELT primary mirror will initiate tiny adjustments to the PACTs to maintain the mirror’s overall shape, correcting for deformations which may be caused by changes in telescope elevation, temperature and wind forces, as well as limiting the effects of vibrations,” explains ESO.

In a speech at ESO’s headquarters following signature of the PI contract, ESO director general Tim de Zeeuw said that the primary mirror, known as “M1”, would be a “marvel of modern technology”.

“It will have 798 hexagonal segments, which have to be polished and controlled to very high precision,” he added. “Together they will form a single 39-meter mirror with a collecting power greater than all the current major optical telescopes combined.”

De Zeeuw also said that although the currently authorized spending on the first phase of the ELT does not include the five “inner ring” segments of M1, the contract does cover the necessary options for it to be completed.

“I am happy to inform you that ESO Council has authorized us earlier this month to concentrate all work on the telescope with the full mirror in place, so you can be sure the option will be exercised in due course,” he said.

Regarding ELT's anticipated capabilities, de Zeeuw added: “With the full mirror the telescope will have stupendous power to study the deep Universe, to resolve the light of nearby galaxies into that of their constituent stars, and, most importantly, to characterize the Earth-like planets we now know are orbiting other stars.

“It is even possible that the ELT will find evidence of life on other worlds, which would be a truly transformational development in the history of our species.”

The award of the M1 actuator contract to PI follows swiftly on the heels of last month’s traditional “first stone” ceremony attended by Chilean president Michelle Bachelet Jeria, and news that another key partner in Germany – optics and glass firm Schott – had cast the blank for ELT’s “M2” secondary mirror.

In January, ESO signed a series of key contracts for ELT’s major optical components, including the edge sensors required by the primary mirror – these are separate to the PI actuator contract.