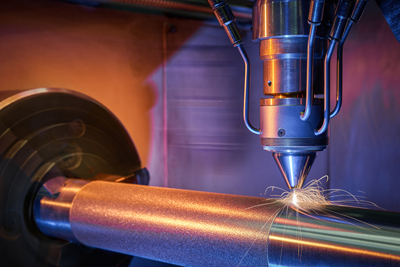 With EHLA, metal protective layers can be applied by laser with ultra-high-speed.

During the annual conference of Germany’s Fraunhofer-Gesellschaft, held on May 30 2017 in Dresden, two annual prizes were awarded: The Joseph von Fraunhofer Prize and the Fraunhofer Prize for "Human-Centered Technology".

The Joseph von Fraunhofer Prize, which has been awarded every year since 1978, in recognition of outstanding scientific work by Fraunhofer staff working on application-oriented problems. This year, four separate prizes were awarded – each valued at €50,000 – two of which went to photonics-related technologies.

The first of these was presented to Dr.-Ing. Andres Gasser and Dipl. Thomas Schopphoven from the Fraunhofer Institute for Laser Technology ILT in Aachen and their colleague Dipl.-Ing. Gerhard Maria Backes from the Chair for Digital Additive Production at RWTH Aachen University.

This team has now together developed an economical alternative to using environmentally-problematic chromium as a protective coating for metal components: a technique called extreme high-speed laser material deposition or “EHLA”.

To prevent components from becoming corroded or worn, for many years they have often been coated with hexavalent chromium. But as of September of 2017, though, this will only be permitted with exceptions. The extreme high-speed Laser Schopphoven and colleagues say that EHLA “offers an economic alternative for the first time ever”.

This laser-based process not only offers companies a way out of the chromium ban problem, but it also provides significant advantages over so-called hard chromium plating; no chemicals are used – which makes the new process more environmentally friendly, say its developers. The resulting metal tlayers are dense and can therefore protect the component from corrosion and wear more effectively than previous approached.

In addition, the new-style coating is bonded to the base material in a material-locking manner so it cannot flake off, unlike the case with hard chromium plating. Various materials can be used for the new coatings, such as iron, nickel and cobalt-based alloys. 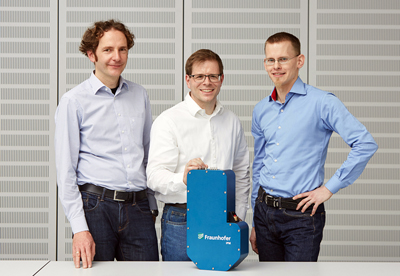 The second photonics-related “Joseph” was presented to three researchers from the Fraunhofer IPM – Dr. Markus Fratz, Dr. Alexander Bertz and Dr. Tobias Beckmann – who wre recognized for “bringing digital holography out of the laboratory and into the production hall”.

"We have been able to eliminate all the disadvantages and have therefore, for the first time, developed a system that allows one hundred percent inspection in production," said Beckmann, who leads the project alongside Fratz. "Our system can measure centimeter-sized rough objects in fractions of a second with micrometer accuracy, thereby compensating for disturbances, such as vibrations."

This holographic technique allows for in-line measurements during the production process for the first time. Instead of taking samples, as before, each individual part can therefore be checked for dimensional accuracy and, at the same time, for the smallest defects. The challenge the three researchers faced was not easy.

"The search for defects is like trying to measure the shape of a 25-meter-high football stadium from a height of 300 meters so accurately that you can find the footprint of a baby in the grass – and in fractions of a second, even if the stadium is shaken by a light earthquake," said Fratz.

Fault tolerance in automobile production is increasingly diminishing. Until recently, this presented suppliers with a problem: There were no sufficient methods for detecting micro defects during production. Visual inspection was the solution of choice, but this is not suitable for in-line measurements in the production process.

By developing digital holography to become suitable for production, researchers at the Fraunhofer Institute for Physical Measurement Techniques IPM in Freiburg, Germany have resolved this dilemma. Digital holography makes it possible to fully inspect all parts – in a matter of seconds.

Other awards were presented for innovations in cleaning waste water effectively and enabling telephone calls to be made with utmost audio clarity. Further information on the “Joseph” awards and the Human-centered technology award is here.