Cree CEO Swoboda to step down

Long-time chief at the LED pioneer and solid-state lighting company is resigning after a recent health scare. 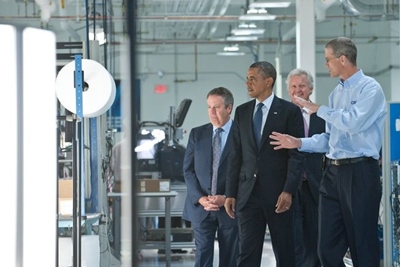 Chuck Swoboda, the CEO of LED and solid-state lighting pioneer Cree, has resigned after more than 15 years in the role.

The decision follows what Swoboda himself describes as a “recent medical issue”, which although now resolved has prompted a re-evaluation of priorities in terms of work-life balance.

Cree announced that it would start looking for internal and external candidates to step into the long-time CEO’s shoes, and that Swoboda would stay on until an appointment is made.

Start-up to LED giant
When Swoboda first joined Cree – back in 1993 – the company was in the midst of a transition from start-up to stock market, having emerged out of the college of engineering at North Carolina State University (NCSU).

Then, as now, the company’s “secret sauce” involved using silicon carbide wafer substrates on which to grow high-quality crystals of gallium nitride that are able to emit blue-violet light at wavelengths around 400 nm. 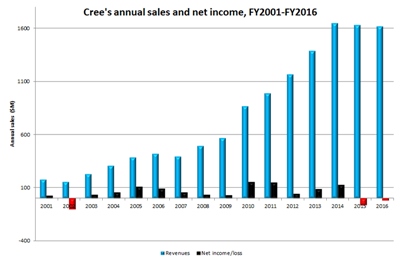 That light can then be converted into broadband white emission with various phosphor materials, ultimately making possible the solid-state lighting revolution that is now well under way.

Cree’s approach differed significantly from virtually every other manufacturer of blue and white LEDs, who based their devices on generally cheaper but lower-performance sapphire material, but the material advantage led to it posting a succession of performance records for white LEDs.

Swoboda stepped into the CEO’s office in 2001, replacing previous incumbent and chairman Neal Hunter. On his watch, Cree’s annual sales have grown from around $100 million in fiscal year 2000 to approximately $1.6 billion in fiscal 2016 – with the rapid growth enabled in part by a technological and first-mover advantage that allowed the company to operate with high profitability throughout much of that time.

LED proliferation
While he has been at the helm, those white LEDs have migrated from initial applications in the backlights of mobile phone handset displays, to widespread deployment in PC monitors and larger LCD displays, specialty lighting systems, automotive headlamps, and LED light bulbs bearing the Cree brand livery.

More recently, with the market becoming vastly more competitive at the LED chip level and Cree moving up the value chain to operate as a lighting company and bulb supplier, as well as a chip maker, those profits have shrunk – with Swoboda reporting operating losses in both fiscal 2015 and 2016 as annual sales flat-lined. 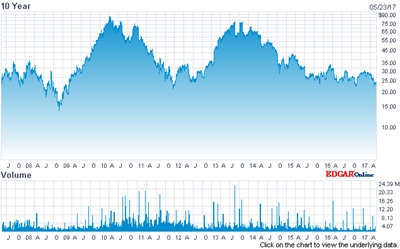 Cree says that the outlook for the rest of its current fiscal year – which ends in June – remains unchanged from that forecast last month. In the first three quarters of the current year, the company has reported a net loss of $92 million on sales of just over $1.1 billion.

However, much of the recent turbulence relates to an aborted plan to restructure Cree through the sale of its “Wolfspeed” microelectronics division to Infineon Technologies for $850 million in cash.

Wolfspeed specializes in radio-frequency and power switch applications of SiC materials and devices, but in February the sale was scuppered by the Committee on Foreign Investment in the US (CFIUS) on grounds of national security.