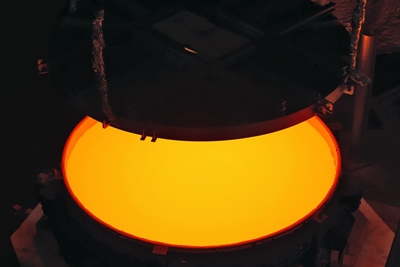 The European Southern Observatory (ESO) says that the casting of the secondary mirror blank for its Extremely Large Telescope (ELT) project – the largest convex mirror ever produced - has been completed by glass and optics provider Schott, in its signature Zerodur glass-ceramic material.

At 4.2 m in diameter, the giant optic will weigh in at 3.5 tonnes, and is set to become the largest secondary mirror ever employed on a telescope once the instrument is completed.

ESO adds that the secondary mirror is strongly curved and aspheric, and therefore presents a major challenge to both make and test.

Exoplanet spectroscopy
Under early construction at the summit of Cerro Armazone in Chile, the optical and near-infrared telescope will feature a 39.3 meter diameter segmented primary mirror, and use adaptive optics with a deformable quaternary mirror to correct for image fluctuations caused by the Earth’s atmosphere.

As a result, once operational the ELT should be able to generate even sharper images than the Hubble Space Telescope, despite being Earth-bound. Among other applications, it will be used to search for the spectroscopic signatures of water and organic molecules in exoplanet atmospheres.

The project, currently slated for “first light” in 2024, represents the largest telescope of its kind anywhere in the world. Alongside nearly 800 hexagonal segments making up the primary mirror, it will feature an unusual concave tertiary mirror weighing 3.2 tonnes, and six laser guide stars for adaptive optics correction. 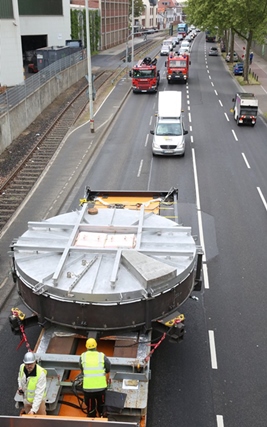 ESO executives signed the casting contract for the secondary and tertiary mirrors with Schott as recently as January, alongside deals for mirror support cells and edge sensors for the primary mirror segments.

The German company has already delivered blanks for the thin, deformable shell mirrors that will make up ELT’s quaternary optic. The deformable elements will also feature a new type of piezo actuator under development between Physik Instrumente and the Fraunhofer Institute for Applied Optics and Precision Engineering in Jena.

“A new milestone has now been reached with the casting of the telescope’s secondary mirror (M2), which is larger than the primary mirror of many of today’s research telescopes,” announced ESO.

Zerodur
Schott used its proprietary “Zerodur” glass-ceramic material to produce the blank. The lightweight material maintains its shape under extreme temperature variations, and has been widely used for astronomical telescopes - including for example the airborne “SOFIA” telescope on board an adapted Boeing 747.

The company has a long-standing relationship with ESO, and produced the 8.2 m-diameter main mirrors for the Very Large Telescope, part of the Paranal Observatory also based in Chile.

Following the high-temperature production process, the secondary mirror must now be cooled slowly, after which it will be subject to a sequence of machining and heat treatment steps over the next 12 months.

Once installed, the secondary mirror will hang upside down above ELT’s primary mirror, forming the second element of the novel five-mirror optical system.