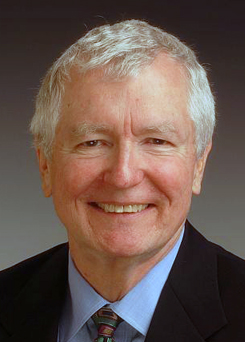 LED and solid state lighting pioneer Lumileds has announced that George Craford, the Lumileds Solid State Lighting Fellow, has been awarded the IEEE Edison Medal for his “lifetime of pioneering contributions to the development and commercialization of visible LED materials and devices”.

He will be presented with the medal at the IEEE Honors Ceremony in San Francisco on May 25, 2017, during the IEEE Vision, Innovations, and Challenges summit.

Craford's career spans from the early days when LEDs were first developed to the production of high-brightness LEDs suitable for commercial use in a variety of applications, including LED bulbs. Even today, Craford is probably best known for his invention of the yellow LED in 1972.

Following that milestone, he then led the development of increasingly brighter red, orange and amber LEDs. In 1979, Craford began work at Hewlett-Packard, where his team pioneered the development of AlInGaP LEDs using metalorganic chemical vapor deposition. MOCVD was then a relatively expensive low-volume process and had not been utilized for the high volume commercial production of LEDs. AlInGaP LEDs increased the performance of red and yellow LEDs by more than 10 times.

Craford’s team continued to achieve technology breakthroughs in AlInGaP LEDs, eventually reaching 100 lm/W. “Not only was George responsible for substantial breakthroughs in technology, but with his team, ensured that the technology could be reliably and cost effectively manufactured,” said Mark Karol, 2017 IEEE Awards Board Chair.

In the early 2000s, his team’s work enabled commercialization of the first high-power LEDs in the 10-20 lumen range. Such LEDs contributed to the creation of the first LED bulbs to meet the high efficiency and long lifecycle requirements to win the U.S. Department of Energy’s L Prize for a 60W-equivalent LED bulb.

“George has terrific instinct for what will work, but at the same time he’s got that practical engineering side that drives a solution until it produces the best results,” said Jy Bhardwaj, Chief Technology Officer of Lumileds. 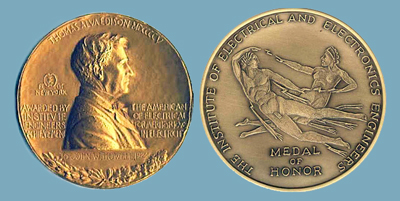 For techical achievement: the IEEE Edison Medal's obverse and reverse.

About the IEEE Edison Medal

In 2011, Prof Isamu Akasaki of Meijo University’s High Tech Research Center, in Nagoya, Japan was recognized for his contributions to the development of nitride-based semiconductors and optoelectronic devices, including visible wavelength LEDs and lasers.”

Federico Capasso, VP of Physical Research at Bell Labs/Lucent, NJ, won it in 2004 for “a career of highly creative and influential contributions to heterostructure devices and materials.”

Ed Hammer of General Electric was the 2002 recipient for his developing energy-efficient fluorescent lighting systems. In 2009, Tingye Li of AT&T’s Communications Infrastructure Research Laboratory was the IEEE Edison Medal for his contribution to the field of broadband optical fiber communications.” The latter two recipients both passed away in 2012.