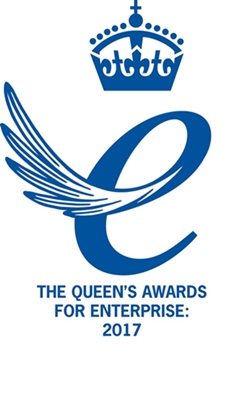 Three UK-based laser equipment companies have been recognized in the latest set of Queen’s Awards.

Meanwhile Bristol-based Third Dimension, which sells laser metrology equipment to automotive and aerospace OEMs, won in the “innovation” category. Its “GapGun” series of products has recently been extended from handheld to automated robotic applications for use on production lines.

Awards galore
For M-Squared, whose lasers are underpinning much of the global research on quantum technology, the Queen’s Award is its second in successive years, among a raft of other accolades won by the company recently.

CEO and co-founder Graeme Malcolm said in response: “We are very proud to be an enabling force in a number of global initiatives to understand the world better, and privileged to work with some of the world’s most ground-breaking scientists.

“Constantly pushing the boundaries of photonics, exporting our technology and working to the highest standards has allowed us to bring new ideas back to the UK, making this a pivotal time for UK quantum technologies in particular.”

Malcolm highlighted the establishment of the UK’s four quantum technology “hubs”, hosted by universities in Glasgow, Birmingham, York, and Oxford, adding: “The UK is capable of being a world-leader in quantum technologies, and the team at M-Squared wants to lead that charge.”

In recent months, M-Squared has variously been crowned the UK’s leading innovator, shortlisted as a finalist in the Lloyds Bank National Business Awards, and been listed on a league table of the country’s fastest-growing exporters – while Malcolm himself claimed the Institute of Physics’ Swan Medal for commercial success using physics applications in industry.

57% rise in exports
Laser Quantum said that its exports had increased by 57 per cent over the past three years, and this week the company is exhibiting at SPIE's Optics + Optoelectronics conference in Prague, Czech Republic, highlighting its products’ suitability for giant laser laboratory projects – such as the nearby Extreme Light Infrastructure (ELI) project that is nearing completion.

In January, Novanta signalled its confidence in the company when it upped its stake in Laser Quantum to 76 per cent with a cash investment of $25.5 million. Novanta is increasing its focus on various technologies for medical and life science applications such as gene sequencing tools and super-resolution microscopy – where Laser Quantum has established a strong presence.

Moving part metrology
Third Dimension will be showing off its latest laser-based technology at next month’s Control 2017 trade show taking place at Messe Stuttgart in Germany.

The firm’s new “Vectro” product is described as a “precision automated laser measurement system”. Visitors to Third Dimension’s stand in Stuttgart will be able to watch two demonstrations featuring Vectro: one integrated robotically to measure a part; and another in a fixed position, measuring a moving part.

Proud as punch with @TheQueensAwards for 2nd year running :) Thanks to our customers, partners, colleagues & friends for making it possible. pic.twitter.com/qTptF5nn8e