ASML responds that Nikon made no 'serious efforts' to negotiate extension of earlier cross-license. 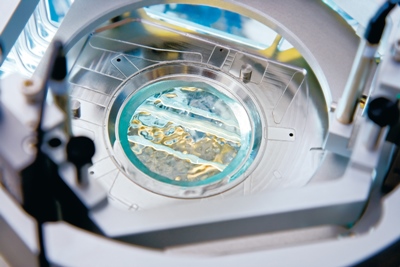 The Japanese firm has filed eleven different suits against ASML in The Netherlands, and says that it will bring further actions in a Tokyo court. It is also filing against Zeiss in Mannheim, Germany – where the optics firm’s Carl Zeiss Semiconductor Manufacturing Technology (SMT) subsidiary operates.

ASML responded immediately, saying it would defend itself against the “unnecessary” litigation. At the time of writing, Zeiss was yet to issue a formal response* [see update below]. ASML is due to complete a €1 billion equity investment in Carl Zeiss SMT within weeks, as part of an effort to develop next-generation lithography optics.

Immersion focus
Nikon's litigation centers on immersion lithography techniques, an optical “trick” employed to shrink the size of features in semiconductor devices that has been widely used for several years.

More than a decade ago, the companies involved signed a cross-licensing agreement covering the technology, with some patents licensed perpetually and others for a fixed period of time. ASML says that a transitional period, during which the parties had agreed not to bring any lawsuits, expired at the end of 2014.

And the Dutch firm’s CEO Peter Wennink claims that, since then, Nikon has not entered into any serious attempt to negotiate a follow-up agreement.

"Nikon`s litigation is unfounded, unnecessary and creates uncertainty for the semiconductor industry,” he said. “Over the past years, ASML has made repeated attempts to negotiate an extension of its cross-license agreement with Nikon. We are disappointed that Nikon did not make any serious efforts to negotiate and has opted for legal action instead.

“We continue to believe that a negotiated outcome would have been preferable for the industry, which thrives on innovation and collaboration. This sort of unnecessary patent litigation distracts from what is truly important: driving technology forward for the benefit of chip makers. We should compete in the marketplace and not in court.”

That version of events does not match Nikon’s, with the Japanese firm claiming in its release: “Nikon has met with ASML and Zeiss with the aim of reaching a resolution of these issues, but those efforts, guided by a highly experienced mediator, have failed to produce a settlement. The continued unauthorized use of Nikon’s patented technology by ASML and Zeiss has given Nikon no alternative but to enforce its legal rights in the courts of law.”

Company president Kazuo Ushida added: “We firmly believe that ASML’s unauthorized use of Nikon patents on our most advanced technologies, including immersion lithography technology, has enabled ASML to expand its lithography business.

“Respect for intellectual property is fundamental to fair and healthy competition, and is essential to promoting innovations that provide society with the most advanced products and services. That is why we have decided to commence this litigation.”

Deal or no deal?
The earlier lawsuits were filed in the US by Nikon back in 2001, with a settlement – on terms that the Japanese firm says were in its favor - finally reached in 2004. However, the settlement agreement included a so-called “non-assertion” period, for which Nikon is now seeking damages.

“ASML and Zeiss have not been willing to accept terms reflecting the value of Nikon’s patented technology,” states the company.

Although much of the focus in recent years has been on the development of extreme ultraviolet (EUV) lithography systems, sales of immersion steppers based around argon fluoride (ArF) excimer lasers remain the cornerstone of ASML’s current revenues.

According to the Dutch firm’s own figures, in 2016 ASML derived three-quarters of its systems sales from ArF immersion tools – equivalent to around €3.5 billion.

And just last week ASML reported that ArF immersion systems represented 37 per cent of its current backlog – equivalent to around €1.7 billion in sales.

While the principles of immersion lithography actually date back to Carl Zeiss advances made in the nineteenth century to improve microscope resolution, the more recent incarnation has been used to increase the numerical aperture of lithography optics above the nominal limit of unity.

It allows lithography tools equipped with ArF laser sources emitting at 193 nm to perform just as effectively as equipment based around fluorine lasers operating at the shorter 157 nm wavelength – an option that had been pursued for several years but which was eventually dumped.

* update (April 25th): Zeiss has since responded, saying that it denies any infringement allegations. The company announced:

"As a technological driver of the semiconductor industry, Zeiss relies on innovation and cooperation as well as the acceptance of intellectual property as the basis of its work. Carl Zeiss SMT GmbH and its strategic partner ASML hold thousands of patents in many different countries. Zeiss considers patent litigation as harmful for the entire semiconductor industry as it keeps manufacturers from fulfilling their responsibility to drive lithography technology forward for the benefit of chip makers.

"Therefore, Zeiss offered Nikon to continue the cross license agreement which expired at the end of 2014 and which granted the mutual use of patents. Zeiss is disappointed that Nikon did not make any serious efforts to negotiate and has opted for legal actions instead."